Wentworth Season 5: Pamela Rabe reveals her life as The Freak

PAMELA RABE WALKS into a room on the Wentworth set to talk about the highly-anticipated fifth season of the series, premiering in April on showcase.

While her character Ferguson is renowned for a dagger glare so intense it can leave even a hardened criminal shaking in her shoes, the actress describes herself as “shy”, which is evident as she gazes at the floor or out the window as she ponders then answers questions.

When asked if she can relate to the late Dennis Hopper’s (Blue Velvet) quote on playing characters who plumb the darkest depths of human nature, Rabe says: “People keep asking me, ‘What evil lurks in you to play bad characters?’” Hopper said. His comeback to that was, “There’s no evil in me, I just wear tight underwear”.

She laughs, but it turns out there’s some truth to what she’s saying. 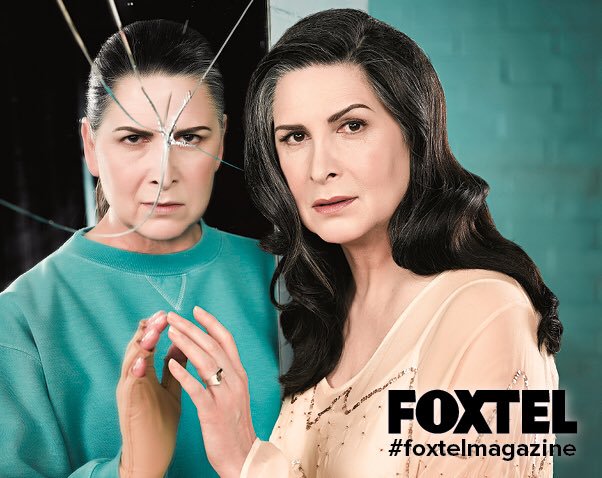 Letting go of The Freak

Long periods in hair and make-up, having her locks scraped back tightly to the back of her head, helped Rabe find her feet with the character.

Equally important, Rabe adds, is being able to let go of the character between scenes and to shake herself free of Ferguson when filming ends for the day.

“I take great pride in the opportunities that are afforded me to step inside other people’s shoes and exorcise part of my spirit in ways I wouldn’t normally get to explore in my real life,” she says.

“I’m paid to do this and I feel it’s my responsibility to go there as deeply and as authentically as possible.

But in order to not have your sphincter in a knot all day… you have to be able to let go.

It’s not dissimilar to theatre. You crack a beer as you walk offstage, take the tram home and do your laundry.”

Initially, Rabe saw Ferguson as having multiple personality disorder, but she gave up trying to give the character a finite diagnosis as the show’s writers kept throwing her dramatic curve balls.

She now sees Ferguson as a “kind of mutant” with psychopathic tendencies, a character who is fiercely intelligent and observant but lacks the moral inhibitors to contain sinful impulses.

So where is Rabe in this psychological complexity? Is there some small part of her in Ferguson?

“Oh yeah, of course there are some things,” Rabe says with a mischievous smile.

“Most things I wouldn’t want to admit to… I have a little OCD, okay.

“That was the writers’ gift to me; that she had difficulty shaking someone’s hand and then squirted a bit of [sanitiser] on her hand.”

If we were to open Rabe’s kitchen cupboards would we find a symptom of obsessive-compulsive disorder in the order in which everything is arranged?

“No, but you would find bottles of liquid hand soap everywhere. Oddly enough there are things I admire about Joan as well as things I find horrifying.”

“Her focus – she’s a doer – her observational skills. I’m quite a shy person,” Rabe reiterates.

“You know when you are put in a social situation, sometimes you get clouded with anxiety and stop seeing, listening and hearing.

Joan is so skilful at being able to suck in and absorb.”

She continues, “When Joan got put in jail [as a prisoner], that for me became tricky because without the bun, without the uniform, without her mask… how do you survive when you suddenly don’t have all the paraphernalia that assures you of your status and place as an individual within the story?”

Which brings us to the horrific season four finale that ended with the stabbing death of one of Wentworth’s central characters, Bea Smith (Danielle Cormack), who had been with the show from episode one.

One moment Bea and Allie were in a passionate embrace on a bed, the next Allie was in the shower being attacked by Ferguson with a drug-filled syringe.

As the clock ticked closer toward the closing credits, Ferguson and Bea tussled with a screwdriver, with the latter appearing to die at the exact moment girlfriend Allie slipped away from the shot of drugs.

As unabashed fan and television critic Cameron Adams described it, it was the show’s “Juliet and Juliet” moment.

However, as Bea died, Allie made a miraculous return to life.

Fans were devastated, in disbelief over the shock exit of such an integral and much-loved character.

Jenkinson puts the storyline into context. “There was something about Allie from the start that screamed out for a bit of levity,” she explains.

“If she was going to be partnered with Bea, have a love for Bea, there had to be some light.

Bea had so much darkness that Allie had to be the antithesis of that, the magnetic opposite, and that’s why Bea was attracted to her.”

Jenkinson was alarmed when she discovered Bea was being written out of the show.

The actress understood why some fans said they couldn’t, or wouldn’t, watch Wentworth again.

“A lot of people said, ‘How can the show continue without this character?’ and I shared a similar reaction [at first],” she reveals.

“But once I had time to compute why [Bea was written out of the show] I felt incredibly proud of the writers and producers because it is not an easy choice they’ve made,” she says.

Indeed, Jenkinson admits the decision was “very calculated, well considered and bold”, while she also reveals that Cormack took the news of her on-screen death like a complete pro.

“Danielle probably took the news better than anyone else because she so understands the dynamics of TV,” says Jenkinson.

“She turned my thinking around. [Bea’s exit] flips everything upside down.”

“It was heartbreaking, but I also think it’s genius. The really great stories take risks and subvert your thinking. Everyone loves a twist and this propels the show in a new direction.”

For Jenkinson, this season presents a sudden, dramatic shift in her portrayal of Allie, whose major plotline up until now has been entering prison and falling in love.

Allie was initially described as an “ice-addicted prostitute with a warm and engaging wit”, but there’ll be much less of the warmth in season five.

The character’s motivation, her portrayer says, will be revenge. “What this means for Allie is that she’ll throw all her muscle and smarts into getting that revenge,” Jenkinson admits.

“She returns from hospital [following the attack from Ferguson] and will let nothing stand in her way. I challenge anyone to watch episode one, season five, and not be hooked on it.”
WENTWORTH (s5) Tuesdays from April 4 at 8.30pm on showcase [114] available in the DRAMA pack