Grey Gardens is the compelling story of Edith Bouvier Beale and her daughter, ‘Little’ Edie, the delightfully eccentric aunt and cousin of Jacqueline Kennedy Onassis.

Once among the brightest names in the pre-Camelot social register, these two women became East Hampton’s most notorious recluses, living in a dilapidated 28-room mansion.

Set in two eras – in 1941 when the estate was in its prime and early in 1973 when it was reduced to squalor – the musical tells the alternately glorious and heartbreaking story of two indomitable women, Edith Bouvier Beale and her adult daughter, ‘Little’ Edie.

It will be presented by The Production Company from Friday 25 November. 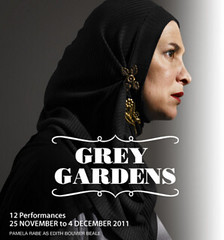 “It’s a very good musical” Hodgman explained simply when I asked him why The Production Company had chosen it. “When “Grey Gardens” opened on Broadway in 2007 it garnered 10 Tony Award nominations, eventually winning three, one each for its stars, Christine Ebersole (‘Little’ Edie) and Mary Louise Wilson (Edith Bouvier Beale) and one for costume designer, William Ivey Long. The story has also been filmed as an award-winning telemovie which starred Jessica Lang and Drew Barrymore”.

Hodgman has directed about 10 musicals for the Production Company and enjoys the challenge and discipline involved in working with top professional music theatre actors to produce a full-scale, albeit simplified, production with the emphasis on the piece rather than the spectacle. The rehearsal period for most of these productions is usually 4 weeks, but in this case it is only 3 weeks, because “Grey Gardens” is a more intimate show than those usually undertaken by The Production Company.

Also, unusually for The Production Company, “Grey Gardens” will run for a two week season in the more intimate Playhouse at the Victorian Art Centre instead of one week in the much larger State Theatre.

The Production Company has assembled a stellar cast for this production, and in addition to Nancye Hayes and Pamela Rabe, the cast will include John O’May, James Millar, Alex Rathgeber, Liz Styles and Bert LaBonte. The musical direction will be in the hands of Kellie Dickerson who has just finished an extensive tour as Musical Director for “Wicked”. Dana Jolly will create the choreography and Fleur Thiemeyer the costumes.

This is not the first time Nancye Hayes and Pamela Rabe have worked together, as Nancye reminded me when I talked to her about “Grey Gardens”. “Many years ago, I played Glinda the good witch opposite Pamela as the wicked witch in a production of “The Wizard of Oz” and later, directed her for a second production. I’m really looking forward to working with her again in “Grey Gardens”.

One of the country’s most acclaimed actors, Nancye Hayes has just returned from a trip to New York to see Tony Sheldon in “Priscilla, Queen of the Desert” and immediately following her season in “Grey Gardens”, she will commence rehearsals for the Sydney season of “Annie” in which she plays Miss Hannigan.

attention among music theatre buffs around the country, not the least being the opportunity to see a stellar cast of music theatre professionals in a challenging musical. Hopefully it will be successful enough to encourage the Production Company to consider touring it to other cities. But just in case that doesn’t happen, you have just 12 opportunities to catch this musical in Melbourne.

Grey Gardens was written by Doug Wright, Music by Scott Frankel and Lyrics by Michael Korie. It is based on the cinema verite documentary Grey Gardens by David Maysles, Albert Maysles, Ellen Hovde, Muffle Mayer and Susan Froemke.