N.B. If you have landed on this page looking for a review of The Lost Echo by Barrie Kosky and Tom Wright, click here for the review.

2006 is a landmark year for the Sydney Theatre Company. It’s the year in which artistic director Robyn Nevin’s Quixotic dream — to create a full-time acting ensemble — comes true.

A dozen actors employed full-time for two years is hardly a huge ask in international terms, but in the petrified Australian funding environment, even the largest and most successful performing arts companies have to raise a majority of their operational income at the box office. And we wonder why our flagship theatre companies look so much like commercial producers… it’s been a fiscal necessity for many many years. 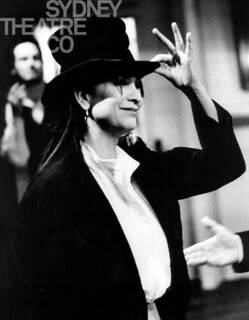 Nevin’s Sydney Theatre Company is a good choice of beneficiaries for this (mostly NSW State Government) largesse. On paper, Nevin’s programming can seem quaint — certainly conservative — but on stage, her choices speak for themselves. They declaim for themselves, actually.

A few years back, the STC scheduled Alan Seymour’s The One Day of the Year. My reaction was a sneering: Why do it? But what hit the stage was so vital, so clear-sighted, that this crusty old play — analysed to death in every Australian classroom — looked every bit as important, insightful and compelling as Death of a Salesman. That 2003 season has to be the high-watermark of subsidised theatre in recent Australian history.

I credit Nevin entirely. She’s a “true believer” from the pre-television era who knows what theatre is capable of. She knows that theatre must be live — absolutely in the moment — and alive. Apart from being an outstanding actor, she’s a matchmaker par excellence. Subtly, she has influenced the creative teams who have worked for the STC under her leadership. Not just directors and set designers, but sound designers and composers, the works. Under Nevin, creative teams have been encouraged to dream great dreams. Ambitious dreams.

The first production by the new STC Actors Company will be David Hare’s translation of Brecht’s Mother Courage and Her Children. It will play at the company’s Wharf Theatre HQ from mid May. Nevin will direct. Unusually, perhaps, for this kind of ensemble, Nevin will not be the sole director of the company. (Barrie Kosky will direct the epic Lost Echo double feature in September, reviewed here.)

Several members of the Actors Company star in the STC’s current production of The Cherry Orchard. Pamela Rabe is a waspish and capricious Charlotta; Dan Spielman plays the boy philosopher Trofimov with a voice that could charm snakes; John Gaden is an avuncular Gaev with a vicious streak; Peter Carroll plays Firs as one bitterly resentful of his freedom.

Nevin herself takes the key role of Ranyevskaya. Watching her, one could imagine what it might be like to have Katharine Hepburn in the role… and not miss anything but the rasp.

Anna Torv is an iridescent presence — quite wondrous — as Anya. Lucy Bell plays Varya with a determined waddle and overstressed tautness. Always an impressive actor in ingénue roles, Bell has evolved into a remarkable and assured performer.

Designer Fiona Crombie’s use of the Wharf 1 Theatre is remarkable. Her costumes, too, are lavish. Stunning. Particularly for the women.

Clearly, British director Howard Davies can take credit for the look, the staging and quality of the performances, but I am far less impressed by his overarching vision, if indeed there is one.

Adaptor Andrew Upton (who made a fair fist of Hedda Gabler, last year, and is a brilliant writer in his own right if his Cyrano is any indication) puts forward a strong thesis: each act is formally self-contained. The first, he writes, has “a dream-like incongruity.” The second is “reminiscent of a Shakespearean pastoral comedy.” The third is a “thundering farcical disaster” and the fourth “has a haunting absurdist quality.”

Davies does best with the pastoral act. The rest, especially the opening, feels oddly forced and strident.

I’m a firm believer that Chekhov should be approached with the same caution as Beckett and Pinter. Bad productions of any of these playwrights can be dire. Will be dire. Good productions are rare. I also believe — from observation — that it’s getting harder and harder to do Chekhov well.

The Cherry Orchard is the first play I ever saw performed live. (I was amazed, as a teen, that I could actually smell the cucumber that Charlotta munched on, from twenty rows back. This time around, the aroma was masked by Yasha’s fragrant cigar.)

A decade later, I saw Jean-Pierre Mignon’s production of the play for Anthill Theatre in Melbourne. Nothing I’ve seen in 20 years since rivals that production. This one is better than most other challengers (especially the woeful recent Queensland Theatre Company production and a passable MTC production some years back) but still oddly unsatisfying. It’s partly the writing. It’s partly a lack of vision and cohesion. And it’s partly the increasing lag between Chekhov’s world and ours. This production is like looking through the wrong end of the scope.