Prior to the first act, an Induction (sometimes omitted) frames the play as a “kind of history” played in front of a drunkard named Christopher Sly. Sly has been kicked out of an alehouse for refusing to pay for his alcohol, and a Lord, come newly from hunting, finds him lying asleep outside and decides to fool Sly into thinking that he himself is a lord. Sly is lumbered up to a classy apartment, and slipped into bed. When he awakes, he is told that he is a great lord who has lost his memory of his real identity, and that his ale-house rambles were no more than a dream. A young man, dressed in woman’s attire, is brought him and presented to him as his wife. Though offered a choice of entertainments, Sly prefers that this wife immediately join him for some play in bed. However, Sly is convinced to divert his attention to a comedy which some players have ready for him (he mistakenly identifies it as a ‘comonty’), and this comedy is that story of Kate the Shrew that follows.

The “Shrew” is Katherina Minola, the eldest daughter of Baptista Minola, a merchant in Padua. Her temper is extremely volatile and no man can control her. She ties her sister to a chair in one scene, demanding to know which of her suitors she likes best and strikes her sister when she cannot answer. In another scene she attacks a music tutor with his own lute. Her younger sister, Bianca Minola, is docile, beautiful, and much sought after by the noble men of the town. She is often remarked as “the ideal woman”. Baptista has sworn not to allow his younger daughter to marry before Katharina is wed. Bianca has several suitors, and two of them agree that they will work together to marry off Katharina so that they will be free to compete for Bianca. One suitor, Gremio, is old and grey, and the other, Hortensio, is feisty and young. 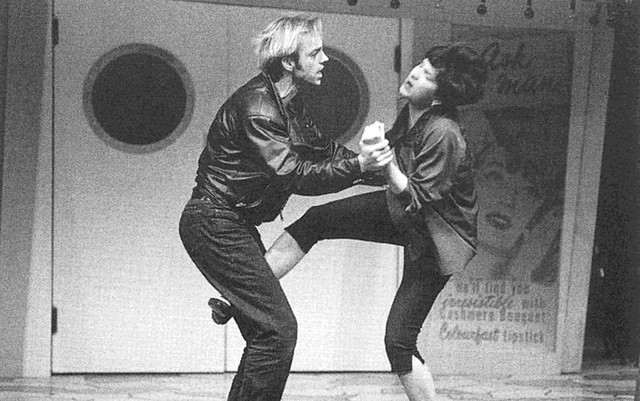 Pam about to kick Hugo Weaving in the testicles

The plot becomes considerably more complex when two strangers, Petruchio and Lucentio, arrive in town. Lucentio, the son of the wealthy merchant Vincentio of Pisa, falls in love with Bianca, while Petruchio seems interested only in money.

When Baptista mentions that Bianca needs a tutor, both Gremio and Hortensio compete to find one for her in order to curry Baptista’s favor. Gremio comes across Lucentio, who pretends to be a man of letters in order to woo Bianca. Hortensio disguises himself as a musician and convinces Petruchio to present him to Baptista as a music tutor. Thus, Lucentio and Hortensio, pretending to be teachers, woo Bianca behind her father’s back.

Meanwhile, Petruchio is told by the suitors about the large dowry that would come with marrying Katharina. He attempts to woo the violent Katharina, calling her “Kate”. In a scene he talks to Katherina and proves to the audience that he will not back down and is her intellectual equal. He quickly settles on the dowry, marries her and takes her home against her will. Once there, he begins his “taming” of his new wife – he keeps her from sleeping, invents reasons why she cannot eat, and buys her beautiful clothes only to rip them up. When Kate, profoundly shaken by her experiences, is told that they are to return to Padua for Bianca’s wedding, she is only too happy to comply. By the time they arrive, Kate’s taming is complete and she no longer resists Petruchio. She demonstrates her complete subordination to his will by agreeing that she will regard the moon as the sun, or the sun as the moon, if he demands her to do so.

Bianca is to be married to Lucentio (following a complex subplot involving Lucentio’s servant masquerading as his master during his stint as a tutor). Hortensio has married a rich widow. During the banquet, Petruchio brags that his wife, formerly untamable, is now completely obedient. Baptista, Hortensio, and Lucentio are incredulous and the latter two believe that their wives are more obedient. Petruchio proposes a wager in which each will send a servant to call for their wives, and whichever wife comes most obediently will have won the wager for her husband. Baptista, not believing that his shrewish Katharina has been tamed, offers an enormous second dowry in addition to the wager.

Kate is the only one who responds, winning for Petruchio a second dowry. At the end of the play, after the other two wives have been summoned as well, Kate gives a monologue explaining that wives should always obey their husbands and lords.

The Taming Of The Shrew