The trailer for Wentworth Season 8 is finally here! And Joan is back…

After almost a year of waiting for new episodes to drop, fans of hit prison drama Wentworth have been treated to a brand new season 8 trailer ahead of next month’s premiere.

And it looks as gritty and dramatic as ever.

The show, which has a diehard loyal fanbase around the world, aired season seven in May last year, with fans eagerly awaiting the next chapter after an explosive finale that saw the unexpected return of Joan “The Freak” Ferguson, played by Pamela Rabe.

The next chapter will see the prison community reeling from the aftermath of season 7’s bloody siege, with a new leader at the helm and four heritage characters from the original Prisoner series set to shake things up.

The show’s stellar Aussie female cast, including Leah Purcell, Susie Porter and Kate Atkinson will all be returning for the new season’s 10 episodes.

Joining the cast is leading Australian actress Marta Dusseldorp as Sheila Bausch, who comes to Wentworth on remand for the murder of nine people at True Path, a cult-like lifestyle retreat.

Of joining the ensemble case, star of A Place to Call Home Dusseldorp said: “I was just so honoured and excited to come on. I said yes straight away. Wentworth is always so beautifully told.”

Other newbies in the line-up include Kate Box, Jane Hall and Zoe Terakes.

Wentworth‘s ninth and final season will air next year on Foxtel, with production having resumed this week following coronavirus lockdown restrictions.

“We have carefully adjusted our production processes to ensure the health and wellbeing of our team and at same time ensured we are able to maintain the integrity of our storytelling,” executive producer Jo Porter said.

The first seven seasons of Wentworth are currently available to stream on Foxtel Demand. 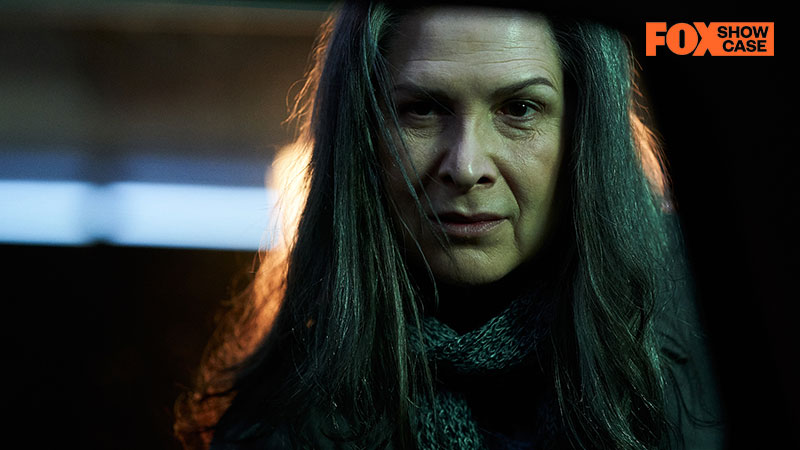 END_OF_DOCUMENT_TOKEN_TO_BE_REPLACED

We finally have a date for Wentworth Season 8 – April 2020! This was officially confirmed on the Foxtel website.

One of Australia’s most awarded TV shows and voted Show Of The Decade (TV Tonight), Wentworth s8 is coming! Back by popular demand and with three heritage characters from the original prisoner series. 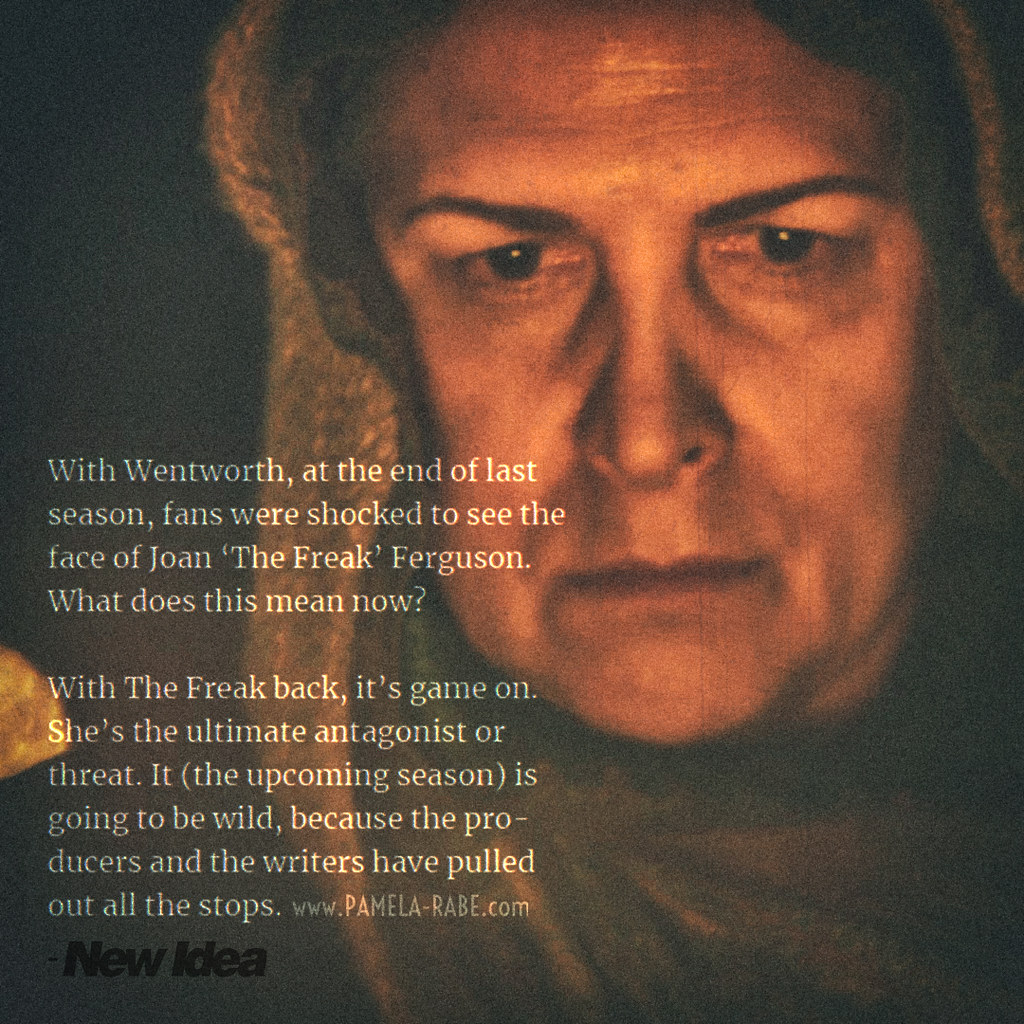 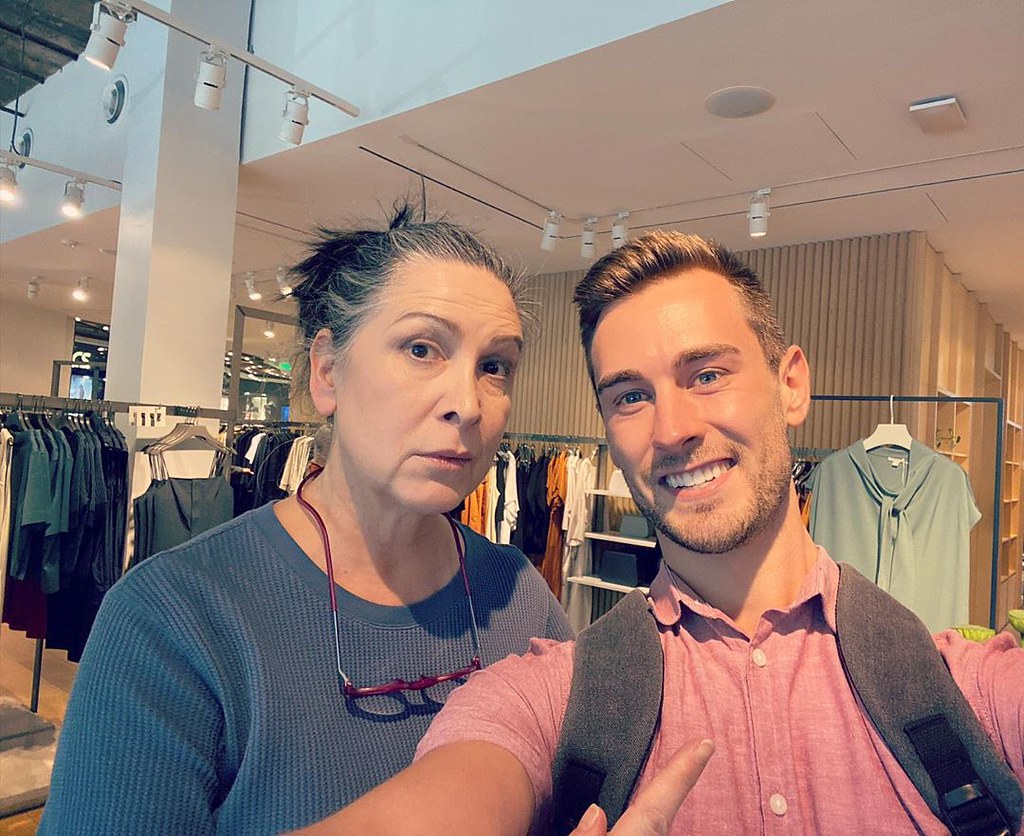 Added 39 Behind the Scenes photos to the Wentworth Season 3 section. 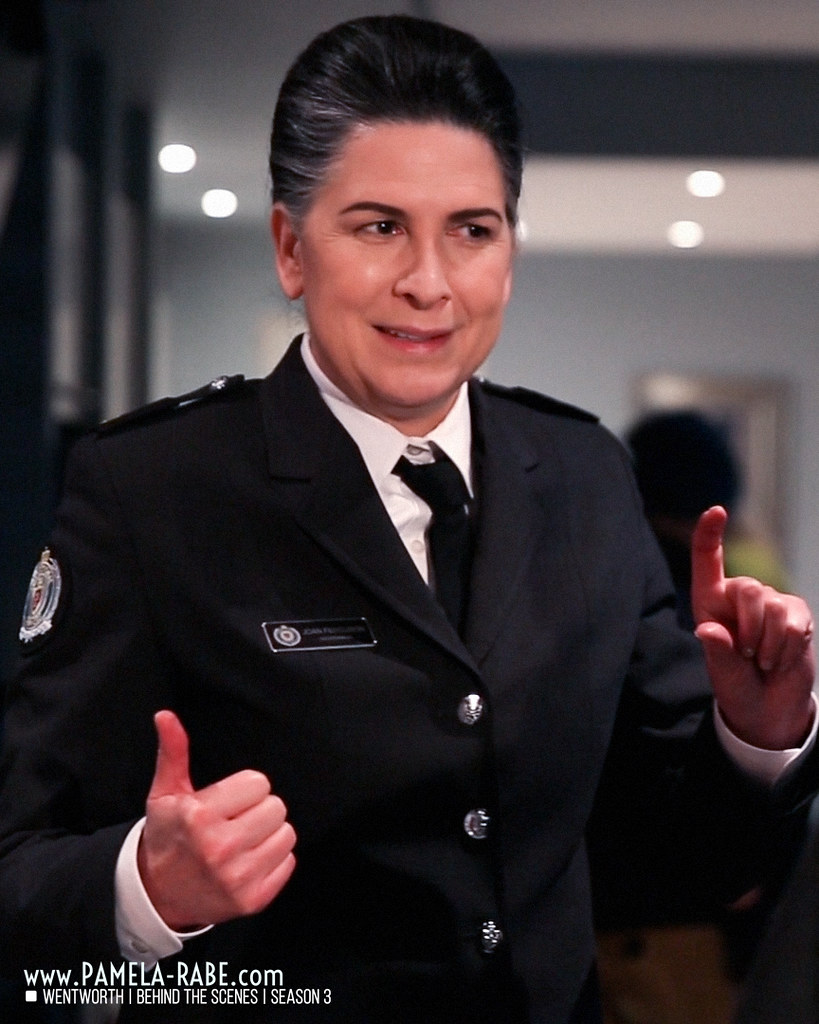 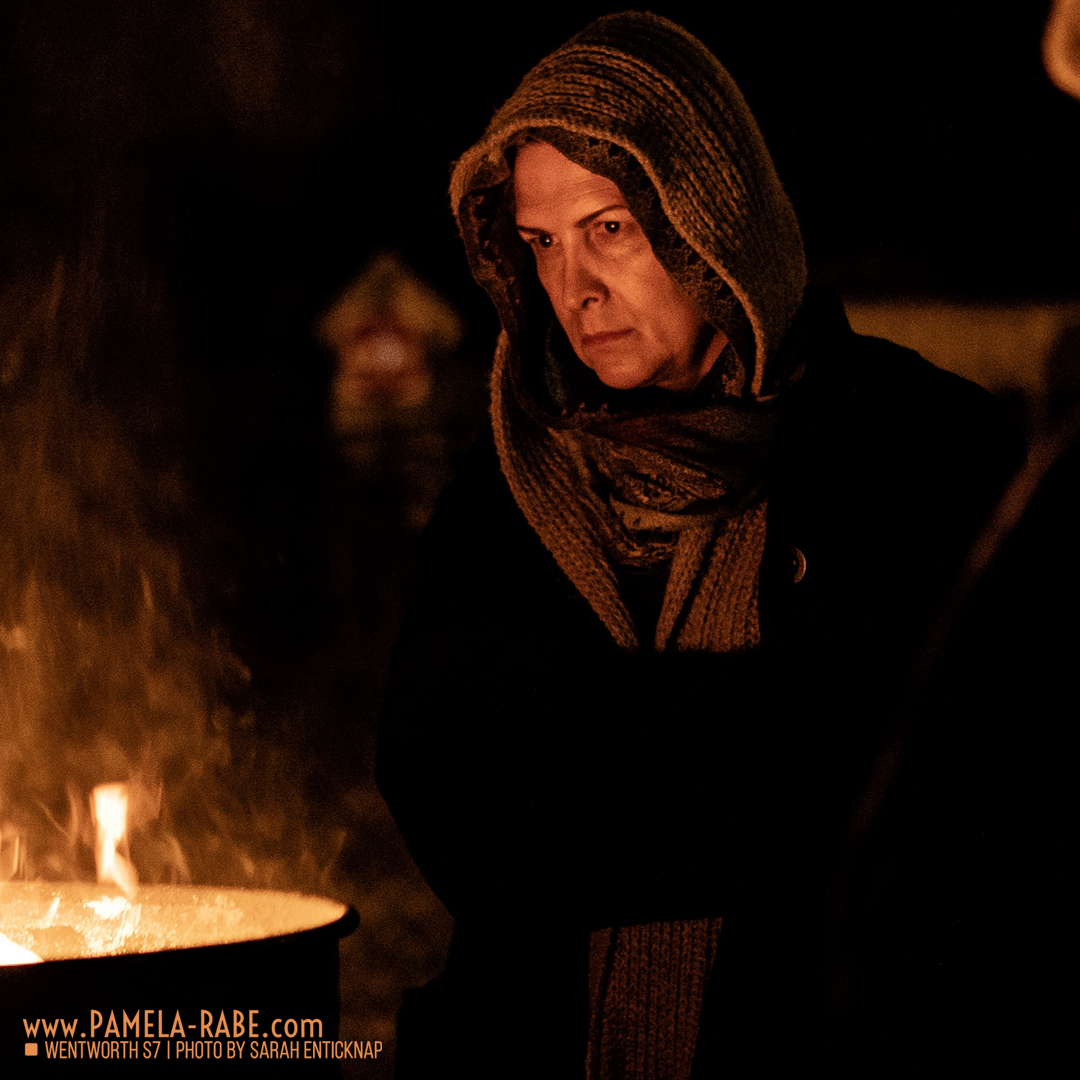 The announcement follows on from a jaw-dropping finale to the seventh season, which ended with a number of bombshells. First and foremost, Joan “The Freak” Ferguson was revealed to be ALIVE.
The final episode picked up with Sean Brody (Rick Donald) and prisoner Marie Winter (Susie Porter) keeping several inmates, along with pregnant Governor Vera Bennett (Kate Atkinson), hostage. In the siege, Brody killed Vicky Kosta (Artemis Ioannides) and Boomer’s mum May Jenkins (Anni Finsterer).
We also found out it was Brody who killed the prison’s top dog Kaz Proctor (Tammy MacIntosh), after he discovered she knew about the blackmail file Marie had on the Attorney General Michael Heston (David Downer).
As this played out, the corrupt Attorney General arrived to make sure his operation to get Marie to safety was going according to plan. He “agreed to Brody’s demands” and ordered a chopper to the prison. END_OF_DOCUMENT_TOKEN_TO_BE_REPLACED 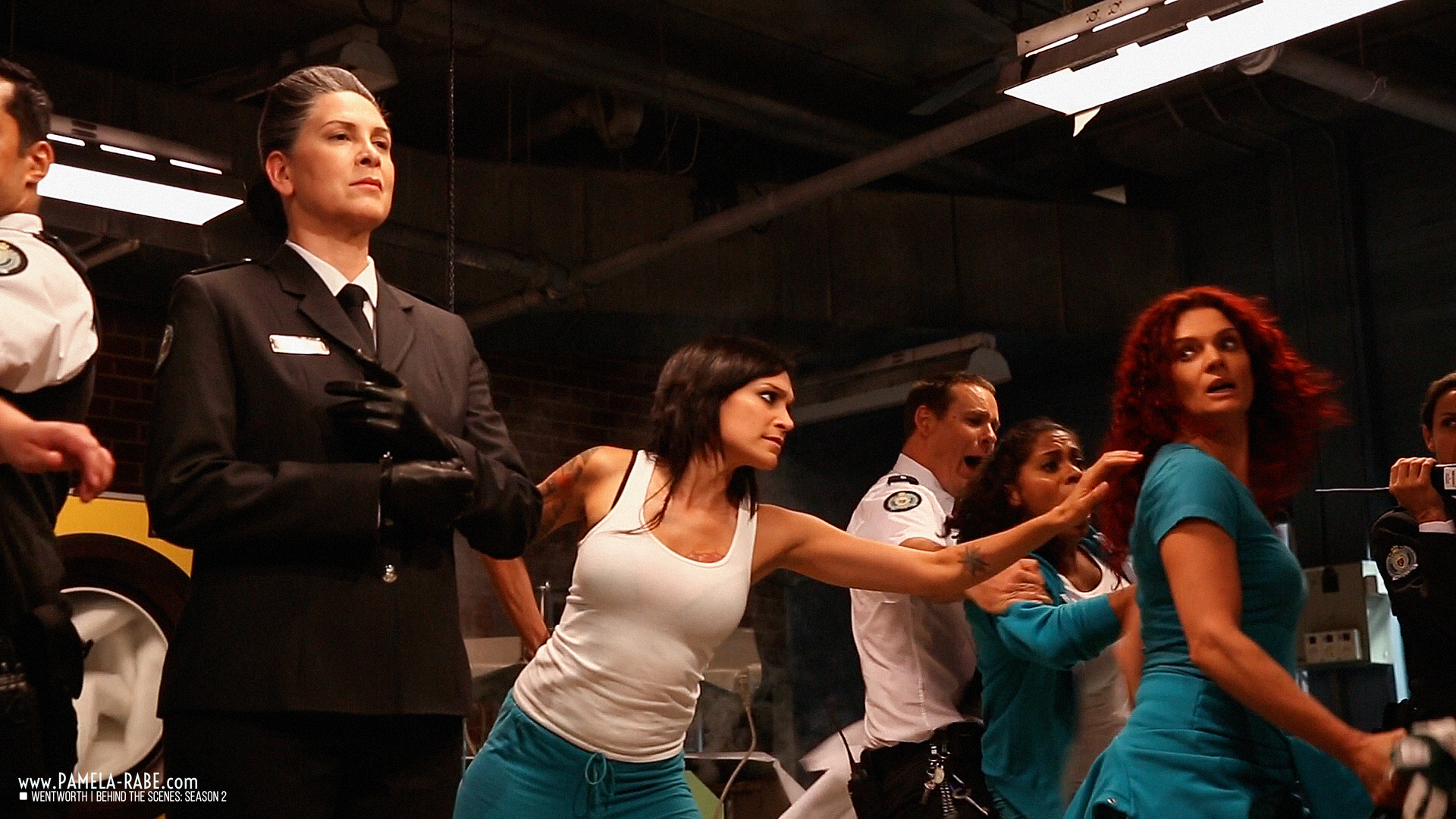 There’s a new interview with Kate Atkinson about the Wentworth season finale on NT News. Here’s the part about Pam:

Apparently there is no coffin that can hold Joan ‘The Freak’ Ferguson. She is alive and well and living rough on the streets of Melbourne.

That’s how season seven of Wentworth ended, with The Freak surfacing just before the end credits, lurking around in a hoodie, keeping warm around a fire, no doubt plotting her revenge.

Fans of the show had closure on one of Australian TV’s most iconic characters of all time when what was believed to be Ferguson’s corpse was shown in this series.

Ferguson, played to perfection by Pamela Rabe (she joined the show in 2014), was being buried alive by prison guard Will Jackson (Robbie J Magasiva) in last season’s cliffhanger.

However Rabe will return to Wentworth for series eight, which starts filming in Melbourne in October.

She’s also delighted Vera, who spent the last episode of season seven pregnant and at gunpoint in a siege, made it out alive, with a daughter (born, of course, in the prison’s boiler room).

“I knew quite early on the writers had been strategizing to somehow work The Freak back into the story,” Atkinson says. 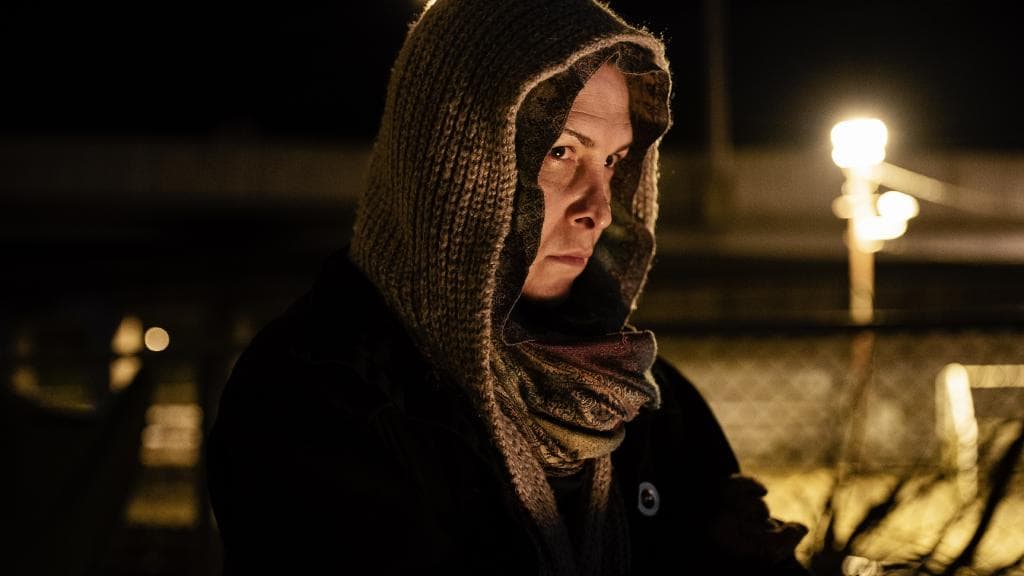 “Pam Rabe and I have a very happy collaborative relationship. I don’t quite know what’s in store for us, but the Vera and Ferguson story is not finished. We’ve stayed in contact since she left the show but to have her back in the prison is beyond exciting. I can’t say anything but the writers pull off the most implausible things. How do you literally bring someone back from the dead? But they will. They’ve got some cunning and clever storylines for The Freak. It’s fascinating stuff.”

While there’s been some fan backlash to The Freak’s return, Atkinson says viewers should wait until the new episodes air next year to judge.

“The Freak brought a different dimension to the show. Wentworth has never pretended to be a documentary or social realism, it’s heightened, heightened drama. She just brought a whole other kind of theatrical height to this show. The writers loved playing with it. They’re teetering on the edge of the logic of how you make these things work but it works because they’ve told me how they’re doing it. And I think people want to go for the ride. If that means having Pamela Rabe back on your screens we should all be very happy.”

“There’s a few other people in that scene, but they’re all crew or writers or staff, so that no one would know The Freak was coming back. All it takes is one loose cannon. That was a very closed set.”

The full interview is available at ntnews.com.au

Almost had a heart attack after seeing the last few seconds of season 7! Best news 2019 so far! Check out this nowtolove.com.au article for everything about this fantastic Wentworth season finale + a short video of Joan’s return!

Jo Porter about the episode:

Jo, we need to know, was it always your intention to have The Freak re-appear at some point?
You might have noticed we never had DNA confirmation that it was actually her in the box – and if anyone could pull this off, well it would be Joan! I can’t wait for the audience theories on how this was possible. I will say [script producer] Marcia Gardner and her writing team have once again done an incredible job of earthing the Joan story – no pun intended!
We know it’s early days, but can you hint at what may be explored in the final 20 episodes?
The ending of series seven has left some tantalising story threads hanging. How will the prison rebuild after the trauma of the failed siege (Marie has been exposed to the women for her role in this)? How will Boomer and Ruby cope inside without the person who had their back? Rita is in police protection, we’ll see Vera coping as a mother, and who will take over the mantle of Top Dog? And, of course, the big one – just how DID Joan Ferguson survive?

Deaths, shock returns and LOTS of tears… Everything that happened in that heartbreaking finale.

Just when we thought we couldn’t be any more flabbergasted, along came a final scene, which showed Joan Ferguson (Pamela Rabe) alive and well, seemingly living rough and presumably quietly scheming her revenge.

What this means for Will (Robbie Magasiva), Vera (Kate Atkinson) and Jake (Bernard Curry) is anyone’s guess. But all we can say is thank goodness this show got a last-minute reprieve and was picked up for another 20 episodes, because now we’ll actually get to find out!