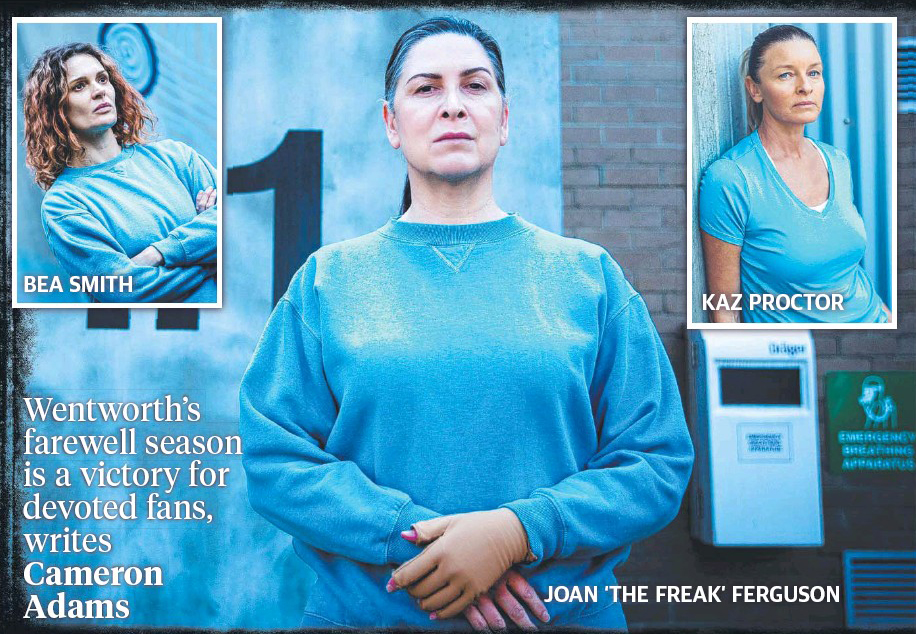 The fanbase is so loyal that when the show was planned to end in 2018 after season seven, fans got wind of the decision before it was announced (a loose-lipped actor also let it slip during a TV interview) and determined to save their favourite show.
Fans not only started a #savewent-worth campaign on social media, there were claims one diehard viewer flew a drone over the show’s Melbourne set to see if the outdoor jail area had been disassembled.

The cast filmed series seven believing they were about to be out of jail for good. “We weren’t certain whether it was going to come back,” Kate Jenkinson, who plays inmate Allie Novak told News Corp at the time.

“When we finished we all said goodbye, not knowing for sure whether we’d ever be on that set again.”

But the fan reaction, as well as industry reaction, when Wentworth won Most Popular and Most Outstanding Drama at the 2018 Logies, saw Foxtel and production company Fremantle decide to keep the cameras rolling.

It was a massive victory for fans and the local TV industry, with the drama employing actors, writers, producers and crew for months at a time. Wentworth also puts female actors in lead roles, a fact that doesn’t escape the cast.

“All the cast members routinely say that whatever job comes after this job is going to be a let-down,” Jenkinson says. “It is so rare, for women especially, but just in general, to get material like this which is so extreme, so hard core, so emotional, so brutal, so cut-throat.

“It’s usually the men that get to go around snapping necks and scheming and plotting and bringing down the institution. In this show it’s the women, which is brilliant to be a part of.”

Rarriwuy Hick, who plays Ruby Mitchell, says the gender policy goes behind the scenes as well. “There are women in almost every department of this show, which is so empowering,” Hick says.

Hick and Purcell have also given Wentworth two strong indigenous characters, with the pair adding their own cultural language to scripts.
“Representation is important. I know we’re in prison which is sad, but sadly you look at statistics and you see there is a large number of Aboriginal people who are incarcerated,” she says. “Just having Aboriginal women on screen is really important.”

One Wentworth event in Melbourne this year was cancelled due to COVID-19, however several cast (including some whose characters are no longer on screen) were flown to the US.

Katrina Milosevic, who plays Boomer joined Pamela Rabe (The Freak), Jenkinson and Danielle Cormack (Bea Smith) meeting a rabid US fanbase.
“It freaked me out how many people knew us,” Milosevic says.

Jenkinson, who has also been in Doctor Doctor and Five Bedrooms, says the fan connection in Wentworth is unique. “I didn’t realise a show could mean so much to people, but it gives a voice to people that perhaps haven’t had a voice,” she says.

She plays one of Wentworth’s most popular LGBTQ characters while this season non-binary actor Zoe Terakes will play transgender inmate Reb Keane.
Jenkinson says viewers appreciate the representation.
“Allie really owned her sexuality,” Jenkinson says. “It was never a part of her character she had to explain, she was always openly and proudly a gay woman. That’s really nice to see on screen.”

Wentworth will end with 20 episodes — 10 have been filmed before COVID, with the final 10 still to wrap.