Pamela Rabe on women in the theatre, Jumpy and Jane

When April de Angelis’s Jumpy premiered on the West End in 2012, Guardian critic Lyn Gardner asked: “how often do you get a West End play that’s intelligent, funny and puts contemporary mid-life women centre stage?” The play follows Hilary, a 50-year-old woman dealing with her difficult adolescent daughter and trying to reconcile her feminist roots with her creeping conservatism. And it dares to cover that rarely mentioned reality in the theatre — menopause.

It’s not the type of content which dominates stages around the world, but director and actor Pamela Rabe (known best for her work in the theatre and as Joan “the Freak” Ferguson in Foxtel’s Wentworth) is confident it will find its audience in Australia. 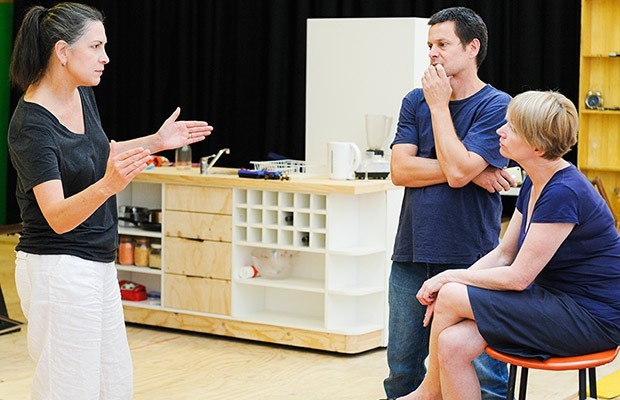 “I think people are actually quite hungry for these stories and it’s kind of been borne out by the response,” she says. “It’s selling like hotcakes just based on its lead actors and subject matter.”

“It just happened that way,” says Rabe. “I think that says something about the world that April De Angelis has written, and the people in this central character’s life — people who are coming at her from all angles. So it just ended up when we were casting the best people for the roles that they came with lots of different skillsets and experiences and energy.”

Fresh out of her season playing Margaret Thatcher in David Williamson’s Rupert, Turner is taking on one of her biggest roles in years, and there’s not a frizzy perm in sight.

“She’s a gorgeous woman,” Rabe says. “We all take our job very seriously, and for Jane this is a big departure from the type of material which she is most closely associated with. Even for her, playing a central role — it’s a character that never leaves the stage.”

Rabe was approached by MTC and STC to direct the play, and says she immediately jumped at the opportunity to work with both companies again, in spite of a busy schedule which sees her begin rehearsals for the Adelaide Festival’s Beckett Triptych during the previews of Jumpy. She knew of the play when she was approached, but hadn’t previously read it.

“It’s heart-breaking, actually. It’s very clever writing and its comedy comes out of the audience’s recognition of the potential tragedy in just raising kids. It questions what it is to be a woman and a feminist — how do you hold on to feminism with the encroaching conservatism of watching your children transition to womanhood?”

While Australian audiences have seen more and more works from female playwrights in recent years, many local theatre companies are still programming seasons which are predominately by male writers. The situation on the West End is no better and Broadway is substantially worse. As just one example of the gender inequality is the 2013-14 Broadway season, which saw only two plays by female writers get up in the commercially-driven world of Broadway theatre. This is despite the fact that all four finalists for the 2014 Pulitzer Prize for drama were written by women.

Rabe says there was a major step forward in the 1980s, when Margaret Thatcher was in power, and both male and female playwrights were writing about the nature of women’s roles, authority and power. Out of that grew a new generation of playwrights internationally, such as Caryl Churchill and Sarah Kane, and locally Hannie Rayson, Katherine Thompson and Joanna Murray-Smith. She says there seem to be a lot of writers shifting their focus back to women’s stories.

Jumpy is in Melbourne from January 31 to March 14 and then Sydney from March 26 to May 16. Featured image: Director Pamela Rabe with David Tredinnick and Jane Turner, photo by Deryk McAlpin

Jumpy, a fable of mother-daughter angst

We’re talking during rehearsals for Jumpy at Melbourne Theatre Company. Pamela Rabe, also renowned as an actor, is directing. The play guarantees a lot of surprises, Rabe says; De Angelis has said that she wants every scene to be a shock to the audience and it’s a pace and style that immediately appealed to its star.

“I don’t get sent a lot of good plays and I thought just as Kath came out of myself, I can totally relate to this material,” Turner says.

This includes the politics and Hilary’s wistful yearning for a simpler time of causes and solidarity, what Rabe refers to as the hunger to feel united.

“This is an age of anxiety,” she says. “Since [1980s British Prime Minister] Margaret Thatcher and 9/11 there’s been a divisiveness and an upsurge in tribal sensibilities and we’ve become individuals in front of computer screens,” Rabe argues. The recent rallies in support of French satirical magazine Charlie Hebdo show the hunger to join hands is stronger than ever, she says.

De Angelis, continues Rabe, is “a great woman and a skilled playwright” and shows a lot of graciousness in the latitude she gives directors to make their own decisions.

As a director she’s says she’s finding it hard to restrain her excitement at working with a living theatre maker, someone to call and email with questions, especially about the tiny cultural elements that might stymie your average Australian. She’s keeping the references to TV shows, nightclubs and even a local serial killer (Walthamstow’s strangler has a website dedicated to him).

“If you’re too universal you lose the joy of specificity,” she says. The detail also gives the work a very contemporary quality. “The play feels dangerous but true,” she says.

Australian audiences may not understand the references to the Greenham Common Women’s Peace Camp, adds Turner, an early 1980s blockade of a UK nuclear weapons facility, but they’ll fathom that it was similar in spirit to protests like the Jabiluka uranium mine blockade.

“Some people will also think Fitzroy and the Franklin Dam,” she says, “Old lefties will get it.”

That includes herself, Turner confesses.

“I’m also an old leftie and went on marches but then consumer society made it harder to keep up the ideals,” she says.

The mother of all midlife crises

April De Angelis’ frank and funny family drama charts the perils of growing up and growing old with refreshing candour. At its core is a strong intelligent woman who once protested nuclear weapons, but who now finds herself largely protesting her teenage daughter’s choice of clothing.

Hitting 50 isn’t the end of the world for Hilary. Nor is the feeling that life has passed her by, that her marriage is slipping into habit, and that her career is going nowhere. It’s even bearable that her best friend Frances has turned to burlesque in an outrageous attempt to cling to youth! It’s actually her wayward 15-year-old daughter, Tilly, who is the icing on Hilary’s anxiety cake.

During its premiere season in London in 2012, Jumpy was touted “the funniest new play the West End has seen in ages” (Telegraph UK). The Australian premiere season comes to the Sydney Opera House direct from a sold out Melbourne season. This heartfelt play has delighted Australian and UK critics and audiences alike.

‘Great performances and a well-observed script. Jumpy hilariously explores light and dark of parental and mid-life angst!’ Craig, via Twitter

‘Congratulations to cast and crew for Jumpy. Lots of genuine audience laughter and plenty to reflect on; Jane Turner as Hilary shines!’ Meredith, via Twitter