Paradise Road is a 1997 Australian war film that tells the story of a group of English, American, Dutch and Australian women who are imprisoned by the Japanese in Sumatra during World War II. It was directed by Bruce Beresford and stars Glenn Close as Adrienne Pargiter, Frances McDormand as the brash Dr. Verstak, Pauline Collins as missionary Margaret Drummond (based on missionary Margaret Dryburgh), Julianna Margulies as U.S. socialite Topsy Merritt, Jennifer Ehle as British doyenne and model Rosemary Leighton Jones, Cate Blanchett as Australian nurse Susan McCarthy and Elizabeth Spriggs as dowager Imogene Roberts.

Basing his film on real events, Bruce Beresford tells the story of a vocal orchestra created by the women in a Japanese Internment camp, a classic survivors’ tale about women’s ability to survive hardship and atrocity through perseverance, solidarity and creativity. The film opens with a dance at the Cricket Club in Singapore. Wives and husbands, soldiers and socialites are enjoying a night of dancing, libations, and conversation. The scene is happy and carefree, but the film continues to unfold and it soon becomes known that a war is raging right outside the doors. Paradise Road is set during the time of World War II, and the Japanese forces have just attacked Singapore. When a bomb explodes right outside the club, it becomes known that the Japanese have advanced beyond defensive lines. The women and children are immediately collected and carried off by a boat to a safer location. A few hours out, the boat is bombed by Japanese fighter planes and the women must jump over board to save their lives.

Three women, Adrienne Pargiter the wife of a tea planter, Rosemary Leighton-Jones a model and the girlfriend of a Royal Malayan Volunteer, and Susan Macarthy, an Australian nurse, swim their way to shore. The place on which they land is the island of Sumatra. The women are found by a Japanese officer, Captain Tanaka, and ushered to a deserted village. They are then taken to a prison camp in the jungle. The three women are reunited with the rest of the women and children from the boat. At the prison camp, there are women of all nationalities including Dutch, English, Irish, Portuguese, Chinese, and Australian; and they all come from many levels of society. Some of the women are nuns, some are nurses, and some are socialites and mothers. The women are forced to bow to the Japanese officers and its flag. The women must endure torture and hard labour while trying to remain positive and level headed. Many believe the war would end soon and their husbands or soldiers will come looking for them. Nonetheless, the living conditions are brutal, and many face sickness and death.

The women have been at the prison camp for two years now. Adrienne Pargiter, a graduate from the Royal Academy of Music, and Daisy “Margaret” Drummond a missionary, decided to create a vocal orchestra in order to encourage the women. Some of the women fear for their lives because the Japanese officers, especially Sergeant Tomiashi “The Snake”, who is made known for his cruelty and abuse, have prohibited any meetings whether religious or social. The orchestra finally performs for the entire camp, even the officers stop to listen to the vibrant music. However, the music only works as motivation for so long and the women continue to dwindle in numbers. After some time, the women are moved to a new location where they will remain for the duration of the war. The war ends and the women rejoice for their freedom. The film closes on a scene of the last performance by the vocal orchestra. The vocal orchestra performed more than 30 works from 1943 to 1944. The original scores survived the war and are the basis for the music performed in the film. In 1997, many of the survivors were still alive during the making of the film and contributed to the inspiration for Paradise Road. 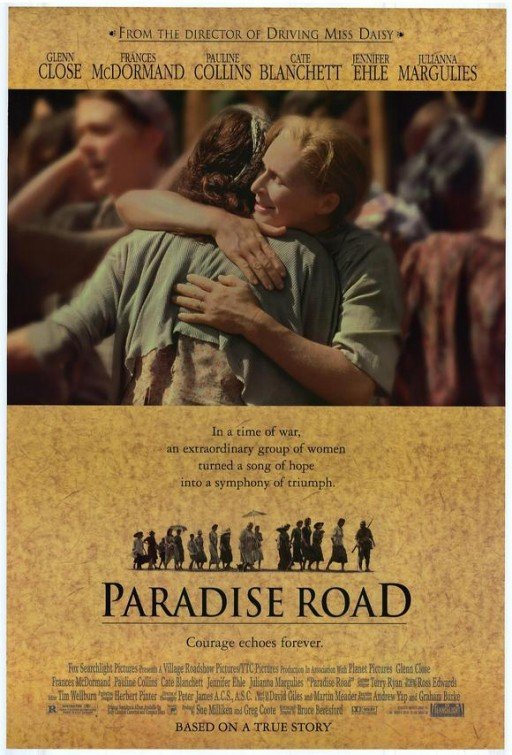