In the drawing room of a fashionable New England townhouse, Claire and Anna’s (Pamela Rabe) long, intimate relationship has struck troubled waters. As both tussle for the upper hand in their relationship, Anna becomes the mistress of a wealthy man who supports her luxurious lifestyle, while Claire grows infatuated with a respectable young girl. But as jealousies rage and spiteful insults fly, a crisis will put the aspirations of both women at risk.

‘I have always loved how David Mamet’s great male-dominated plays fused surface linguistic brilliance with layers of game-playing subtext. In Boston Marriage you can see these skills transferred to an entirely unMamet-like milieu. A delicious tension arises when his strikingly modern sensibility crashes through the doors into the perfumed parlour of these respectable Bostonian bluestockings. A play of such scintillating surfaces, Wildean wit and startling malevolence requires an actor with the control and stature of our beloved Pamela Rabe, who returns to the Company to work with new Associate Director Aidan Fennessy.’ Pamela Rabe is performing in Boston Marriage, on now until 24th July at the Fairfax Studio in the Arts Centre, and joined in the conversation to guide the guys through the tricky waters of what is quite a racy play.

‘The Boston wives in this play, Anna (Pamela Rabe) and Claire (Margaret Mills), are fast-talking and smart-mouthed, educated and cultivated. They have expensive tastes but lack independent means, so Claire relies on Anna and Anna relies on wealthy married men. Like an Oscar Wilde comedy, Boston Marriage is a trivial play for serious people. It sparkles like a brilliant cut diamond. In this production, impressively directed by Aidan Fennessy, Rabe’s Anna struts and frets and insults the fired help. Mills, the perfect foil, plays the egotistical lover with icy grace.’
Chris Boyd, Herald Sun, 11 June 2010

‘American playwright David Ma met penned this female-only story of fin-de-siecle lesbians looking to find security – financial, personal – in a less than tolerant society. The result is an oddly gruff, blokey comedy played out by a trio of outstanding Australian women … [W]hen the performers embrace the camp excess required of them, the production exceeds its source by offering dazzling performances in an intoxicating setting.’
John Bailey, Sunday Age, 20 June 2010 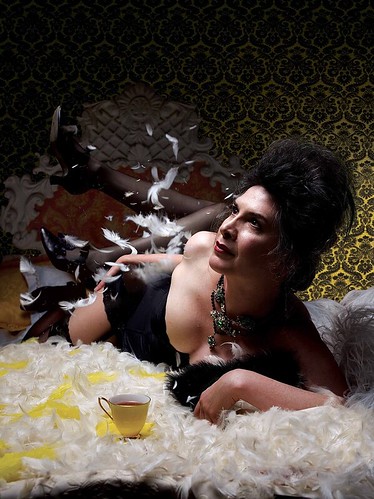 Pamela Rabe as Anna, Margaret Mills as Claire, and Gleeson have their comic timing finely tuned to great effect. Their performances are as tight as their corsetry. -Australian Stage