Be again, be again.

Footfalls features May, wrapped in tatters, metronomically pacing back and forth on a strip of bare landing outside her dying mother’s room. Part ghost story, part exploration of the existential bonds between parent and child, Footfalls sees Beckett at his purest, speaking directly to our subconscious.

Eh Joe plumbs the depths of Beckettian regret. An ageing man sits in the secure solitude of his bedroom. But his locked door cannot block out the insistent woman’s voice that enters his mind, forcing him to face up to his past and the lovers he has failed or driven to destruction. Tormented by his inner demons, he is made to relive everything he has tried to forget.

One of Beckett’s greatest works, Krapp’s Last Tape is a haunting look at the many lives we live in the course of a single one. Krapp, an elderly man, is surrounded by darkness in his room—a single light illuminates his only significant possession, an old reel-to-reel tape recorder. It is his birthday and, as is his annual ritual, he records recollections of the year while also cackling over his old tapes. What starts out as the vaudeville of an old man’s memories, however, increasingly becomes a confessional that reveals a life of missed opportunities; and Krapp’s nostalgic laughter turns into heavy silence.

A rare and intimate theatre experience not to be missed.

Footfalls is a play is in four parts, each opening with the sound of a bell. The play is very structured with the timing and pace being critical; ‘The walking should be like a metronome’, Beckett instructed.

May, a woman in her forties, paces back and forth, using only nine steps in total. She is outside her mother’s room. Her mother, who is only ever heard in the play, is ninety years old and in poor health. Part of the mystery of the play is whether the mother is real or a creation of May’s mind.
May speaks to her mother:
M: Mother. [Pause. No louder.] Mother. [Pause]
V: Yes, May.
M: Were you asleep?
V: Deep asleep. [Pause] I heard you in my deep sleep. [Pause] There is no sleep so deep that I would not hear you there. [Pause. M resumes pacing. Four lengths. After first length, synchronous with steps.] One two three four five six seven eight nine wheel one two three four five six seven eight nine wheel.
As May paces she hugs herself, her arms crossed, with the hands clasping her shoulders in front. May’s posture gives the feeling that she is isolated. May is a shadow of her former self, with a ghostly pallor, and wearing tattered nightwear. Her posture May sinks lower during the play. May’s journey has been described by Jonathan Kalb and Billie Whitelaw: “May gets lower and lower and lower until it’s like a little pile of ashes on the floor at the end, and the light comes up and she’s gone.”
In the second part, the mother tells the audience that May begun her obsessive pacing in girlhood. Originally the hall was carpeted, but May asked her mother to have it taken up, saying she needed “to hear the feet, however faint they fall; the motion alone is not enough.”
The third part parallels Part II, this time with May speaking of her mother and her life. She talks as though it were the life of someone else and even refers to a person called “Amy,” which is an anagram of May.
In the final section there is no one on stage. The bell chimes; the lights come up and then fade out. “The final ten seconds with ‘No trace of May’, is a crucial reminder that May was always ‘not there’ or only there as a trace.”

Footfalls is a Grey Gardens-esque story of a middle aged woman (May/Amy, played by Pamela Rabe) whose life is dedicated to caring for her ailing nonagenarian mother (an off-stage voice) and carefully pacing backwards and forwards across the same patch of floor, night after night. The dialogue is often more like a monologue split between two people, with Rabe’s character talking about herself in the first and third person at different times. Rabe is exceptional here – disturbing and fragile and bringing such a controlled madness to the tiny stage that you can’t help but be drawn into this bizarre, claustrophobic relationship.
–http://www.theaureview.com 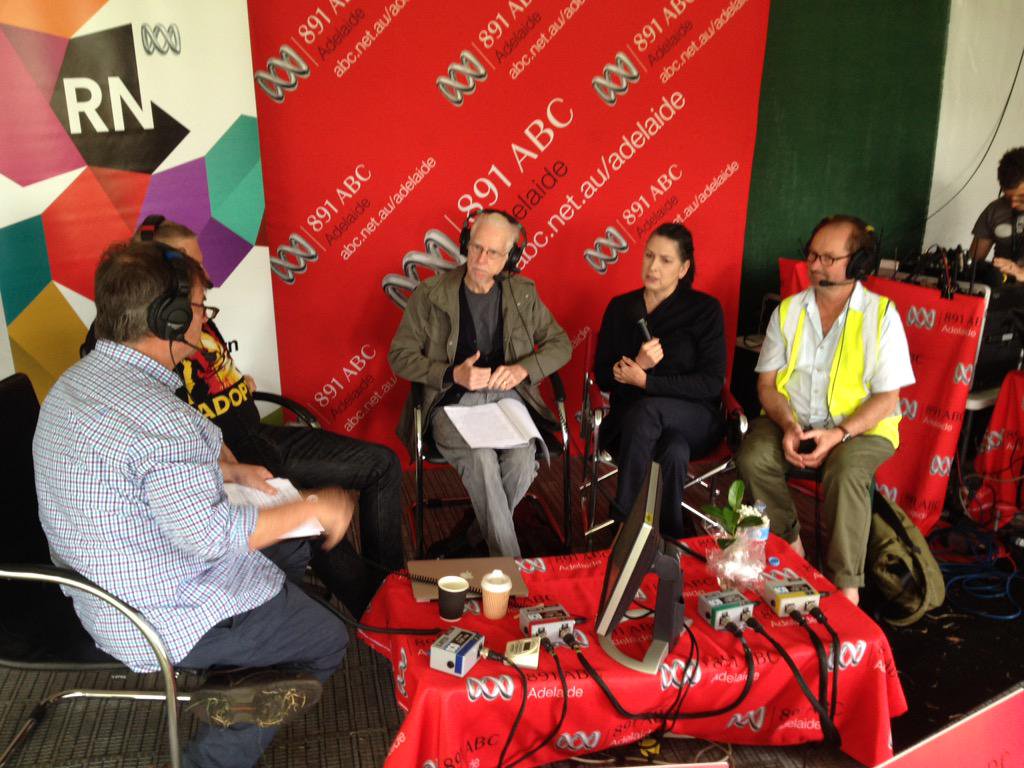 2015 seems to be the year of Beckett in Australian theatres.

His work has been performed at the Perth Festival and both the Melbourne and Sydney Theatre Company’s are staging Beckett’s play Endgame later this month.

Beckett’s theatre is also being featured at the Adelaide Festival.

FOR fans of Irish avant-garde playwright Samuel Beckett, the start of Mofo 2016 is music to their ears.

Paul Blackwell stars in Eh Joe, Peter Carroll takes centre stage in Krapp’s Last Tape, and Pamela Rabe plays the ghostly May in Footfalls, pacing metronomically back and forth outside her dying mother’s room.

It may sound a bit glum, but Rabe said the works were a perfect complement to the music-heavy program.

“All of his pieces are very musical,” she said.

“Although he is notorious for giving quite meticulous instructions to performers, he also leaves a certain amount of freedom — not unlike a composer of music.

“I’m kind of in free-form jazz mode during this performance, but I have to remember to carry that [metronomic] tempo in my body.

“Because Beckett blurs the lines between performance art, visual art, poetry, literature and mischief, the devil in that man is the perfect fit for the world of Mofo.” COSTUME
The costume is a gown like a wedding gown or Victorian tea gown. It feels antique and timeless, but will have a skeletal spidery net look. It will be in a grey, toneless shade, giving a washed out, soulless feel and Pamela will have white long flowing hair. Beckett describes the costume as, “Being the costume of a ghost. You feel cold. The whole time.”

QUESTIONS FOR THE DIRECTOR

1. What was your main reasoning behind programming three of Beckett’s shorter plays?
It’s rare that we are provided with the right context to look at Beckett’s shorter works. I thought the Adelaide Festival and the particular venue set up, with the workshop and rehearsal space, provided that context. For many people, Beckett simply means Waiting For Godot and he is so, so much more than that.
2. Although there is only one person onstage in Footfalls, there is a recorded voice throughout.
a) Was there a conscious decision to use a recorded voice as opposed to a live voice – and if so, what was the reasoning?
It’s been done in many different ways in different productions. My primary reasoning came from wanting the particular combination that Sandy Gore’s voice would provide with Pamela Rabe’s. Jason Sweeney, the Sound Designer, was also interested in making it feel as if the Mother’s voice could also progress from specifically located with May to becoming a voice inside all of our heads. The best way to achieve this was through sound design and pre-recorded vocals.
b) What is your process of rehearsing this voice along with the actor?
Essentially, we rehearse like any normal play. Sandy is with us through the entire rehearsal process and then, as we are about to start tech week, will record a final draft that will be worked into the sound design.
3. The pacing of May is critical and has been exactly described by Beckett; (The walking should be like a metronome one length must be measured in exactly nine seconds. And these stretches of walking are ‘the centre of the play’; everything else is secondary.) What does this mean to you and how do you work on this in rehearsal?
In many ways Beckett defies concrete notions of meaning – it’s part of what I love about him. Beckett was obsessed with the combining of form and content (this same obsession can be seen in some contemporary writers like Martin Crimp and Sarah Kane). The idea that the way that something happens, is as important as what actually happens. I think the pacing encapsulates the play’s central thematic thrust. The rest I’ll leave for the audience to interpret how they like!
4. What are the essential themes that stand out to you in this piece?
The relationship between parent and child. Memory vs. the present. The haunting effect of trauma.
5. Pamela Rabe is a highly respected Australian actress. What are her strengths as a performer and how has it been working with her on this piece?
I think Pamela is one of the best actors in the country. She has an extraordinary combination of strength, intelligence and fierce will that make her a real