Set originally in the salons of the decaying French aristocracy the themes of the play are timeless. Hampton’s adaptation of the novel by 18th Century French writer Pierre Choderlos de Laclos examines all the guises of love and the sister emotions which run alongside it when thwarted – jealousy hate and cruelty. This complex production has a timeless chic about it, with stylish costumes (Mel Page) and a clever set (Dale Ferguson) which serves the numerous scenes and locations through changes in light, sound and use of doors and passages. The Vicomte de Valmont (Hugo Weaving) and the Marquise de Merteuil (Pamela Rabe) have a history. That sexual relationship has been subsumed now by the plans for revenge with which they delight each other. Two targets are in their sights. The Vicomte’s goal is Madame de Tourvel (Justine Clark) who is living with his aunt, Mme de Rosmonde (Jane Harders) whilst her husband is away. He sees this seduction as the perfect test of his powers – to make a married virtuous woman flaunt all her strictly held moral codes and surrender to him. The Marquise says that if he can do this and bring her proof in writing she will spend the night with him. The Marquise urges the Vicomte to corrupt young and innocent Cécile de Volanges, (Geraldine Hakewell), the daughter of her friend Mme Volanges (Heather Mitchell). This is revenge because the man Cecile is to marry has recently discarded the Marquise as a lover. Cecile has fallen in love with her music tutor Chevalier Danceny (James Mackay) and the Marquise and Vicomte offer their services to both Cecile and Chevalier to forward this romance, whilst nefariously using them for their own means.

The Vicomte complains that the seduction of a young girl is too easy a task until he discovers Mme Volanges has blackened his name with Madame de Tourvel, making his task with her much more difficult. He then begins the sexual exploitation of Cecile, whilst the Marquise takes Chevalier as her lover. These machinations beget unforeseen circumstances. When at last the Vicomte succeeds with Mme de Tourvel he has actually fallen in love with her. This one true relationship and betrayal of it shatters everything. “War” is declared between the Vicomte and Marquise with eventually fatal consequences. 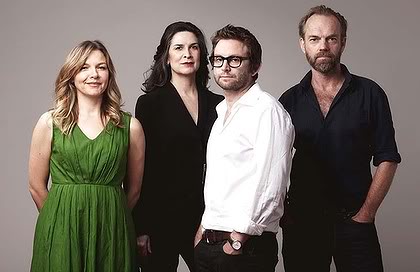 Weaving’s performance is like examining layers of tissue paper, torn a little here and there so we see the libertine surprised by his own chiaroscuro, falling in love so late in his career. Rabe, as the tortured marquise is poised, ice cold and indescribably cruel. The air between them crackles with intensity and hidden import.

Pitch perfect is the term which comes to mind for the whole cast including TJ Power and Ashley Ricardo in minor roles. Mitchell is particularly affecting as a distraught mother and betrayed friend. Hakewell’s wordless crumble when rejected by Chevalier is heartbreaking. Clark‘s portrayal of Mme de Torvel’s breathless internal battle and eventual decline provokes distress. Harders as the wiser older woman who intones “men don’t love like us” is heartfelt.

It is seldom that one is privileged to watch such a strong but delicate latticework of theatre unfold faultlessly. The danger lies in missing it.