Skip to content
Lost in Yonkers, by Neil Simon, directed by Philip Cusack for Sydney Theatre Company, Melbourne Theatre Company and State Theatre Company of South Australia, at the Canberra Theatre, 8pm until December 3. Also, today at 2pm, Monday at 6.30pm and Wednesday at 11am. Professional.

GRANDMA is so sharp she can smell the salt licked off a pretzel. To touch her is to touch steel. In short, as her bagman son Louis says, she has “moxy”, a noun roughly translating as “balls”.
Little wonder, then, that her children live in terror of the old lady and that her two teenage grandsons, Arty and Jay, dread spending a few months with her while their father sorts out his affairs.
Neil Simon’s situation is a simple yet familiar one. A solid middle-class house in upstate Yonkers, rendered even more solid by Roger Kirk’s finely realised 1940s set, is the setting for an astutely judged mixture of comedy and pathos, a most satisfying formula for any audience and one which has made Simon a wealthy man.
Ruth Cracknell as the German-Jewish Grandma gives a restrained and generally unsentimental performance, with a fine entrance delayed by the playwright almost to bursting-point.
As Aunt Bella, childlike because of infan tile scarlet fever yet possessed of a zest for love and life which Grandma has almost forgotten, Pamela Rabe turns in the most radiant performance of the evening.
Rabe’s subtle movement from girl to woman in this part parallels exactly the movement of Neil Simon’s plot.
Holding the play together with almost as much zest were the two boys, played with charming conviction by Brian Rooney and Damon Herriman.
They also do some highly visible growing up. As the battle-scarred assortment of father, aunt and uncle (respectively, Nicholas Hammond, Kirrily Nolan and Steven Vidler) combined comic pace with warmth, contributing the sense of “family” so often referred to in the script.
No need to reveal more of this story. Suffice it to say that the playwright as usual combines key acting scenes, such as the one where Bella reveals her hopes of marrying, with Yiddish wisecracks fast-enough to take your breath away.
He also satisfies his audience with a fondness for exposing, truth-telling scenes which did not always convince me at a realistic level but which enlightened and explained. Grandma, for instance, is still steel at the end, but at least we know why.
No doubt this fine production of the Pullitzer-prize winning Lost in Yonkers, the first incidentally outside the United States, will prove a sellout for the Canberra Theatre. As a totally satisfying, comprehensible and amusing evening in the theatre, it de serves to be. 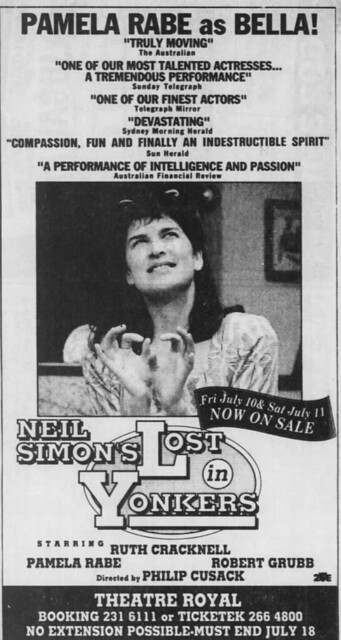