Pamela Rabe, 38, is one of Australia’s top theatre, film and television actors. Roger Hodgman, 53, is director of the Melbourne Theatre Company. They met in 1979 in Rabe’s home town of Vancouver, married five years later and now live in Melbourne. Hodgman is currently directing Private Lives at the Sydney Theatre Company and Rabe is playing the lead role.

Pamela: Roger was the first love of my life. Still is. I was a student and he was a teacher. I was quite bowled over by him and his skills; I still think he’s the most extraordinary teacher I’ve ever had. It always takes me a long time to realise someone’s coming on strong to me. So I was drinking in every word of praise and didn’t realise this was just the pick-up line.

Then we were worried what people would think. And, with backstage gossip always about how the director gets to sleep with the actresses, for a while you’re just a cliché. People snicker.

It is difficult being a director’s wife. It is still always, absolutely, the first thing that comes to my mind whenever I’m offered a role at the MTC. Whatever people say, I can’t help myself feeling I have some sort of unfair advantage. And, with every year, I’m much more aware of my inadequacies and vulnerability, so that doubt gets worse. But it’s part of the package; I don’t know any confident actors.
We think the same about things. I don’t know how much that’s because my adult tastes have been moulded in his presence. I don’t think I have Pygmalion fantasies but he’s probably had more influence on me than I have had on him. Roger is much more optimistic than I am, more able to see the bright side of things. I do fear that if I was to become as sunny or determinedly optimistic as Roger, it might send him plummeting down into a deep depression. I think he carries a great deal of sadness all the time, but he’s so determined to see the bright light ahead that he doesn’t allow himself to feel it.

Everything is much more on the surface with me. Every doubt I have is articulated. And Roger is very good at responding to that. He’s allowed me to be much more childish, which is probably frustrating for everyone else, but suits us fine. There’s some sort of balancing act in our relationship. It’s hard to categorise; it’s quite obsessive. We care deeply about each other. But it wouldn’t have lasted as long if it had just been a one-sided thing like ‘Oh, he’s got her under his thumb’ or ‘She’s making him run rings around her’. It’s much more complicated, more symbiotic.

I just hate the thought that I need him so much. And I do. Occasionally that makes me think I’ve got to throw some weight around, so irrationally and in a very nasty way, I’ll try and assert myself. And Roger’s so amenable that he’ll cater to me; he’ll give me a great deal of care and attention and love and spoil me rotten. He gets quite upset when [I worry about where he is]. He thinks it’s an age thing, that I think he’s going to die, pop off any minute, like he’s really old or something. It’s not that; I’ve never thought of him as much older. It’s more because in Australia all my eggs are in one basket. Roger is my family and everything.

I suppose the first two years with Roger were the most difficult; it was all a bit off-and-on. I remember once when I was involved with another acting student and Roger was back on with another actress and, in the midst of all this, I went quite casually to have my tarot cards read by some woman in a kitchen. And she said: “I see two men with you. One’s really good for you and the other’s not so good.” And I still don’t know which one it was. But I have a sneaking suspicion I made the right choice. 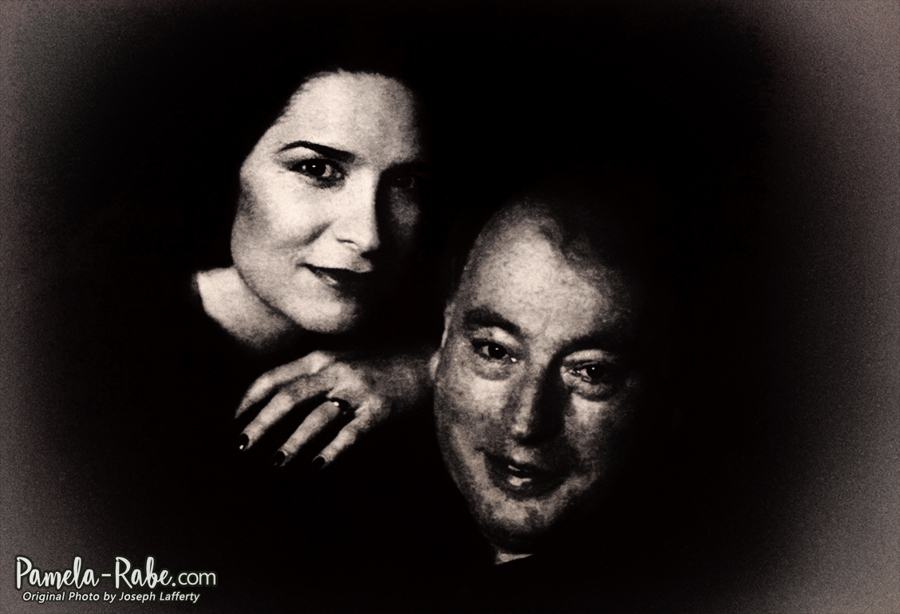 Roger: Every now and again, when you are teaching and directing, you see someone who’s still untrained and raw, but just really extraordinary. Pamela was extraordinarily talented. I think talent is the great aphrodisiac. We did have rocky times early on. I was running the [Vancouver] theatre company and she was a very young actress straight out of drama school. I’d been married before and I wasn’t sure if I was ready for another long-term commitment. But she’d decided I was the person for her. That was tricky. I don’t think I behaved particularly well then.

When Pamela’s rehearsing, I’m never entirely sure who’s going to come home. Something of the character, the mood, stays with her. If she’s playing a role of someone who’s very happy and gay and light-hearted, well, that’s more fun than when she’s playing Miss Julie, when she gets suicidal.

I think it keeps our relationship interesting. And the other thing that does is that we don’t see each other a great deal. With her career, she is away as often as she is here.

A lot of people who don’t know her very well think she’s much more self-assured and together than she is. Whereas she’s constantly questioning her own ability. That can be an admirable trait, but it can also be quite tiring to be with somebody who’s always so insecure about their abilities. Sometimes I have to sit down and say, ‘This is ridiculous.’

If 10 was happy and zero was sad, I’d put Pamela between 3 and 4. I think she’s more often unhappy than happy and I think I’m the opposite. I’d be 6 or 7. She thinks the worst will happen more than I do.

When I got the job at the MTC [as director in 1988] Pamela felt that it was important for her to get away, for her not to work too often at the MTC. So she moved to Sydney for two or three years. And that caused anguish … it was a decision we both made with the head more than the heart. It wasn’t a happy time.

I don’t think we thought [the relationship might be over] but we feared separation would put it at risk. Which it didn’t. But, around about the time she moved back to Melbourne, there was this very strong rumour going around the theatre community that we had split up. Completely wrongly.

People were literally phoning from New York and London. And that went on for a year or two. It was really weird. The stories would become more complicated; that we were with other people, that Pamela had become a lesbian with an amazing group of women.

It’s notoriously difficult to have a good relationship in our business; most of our friends have split up. Pamela is one of those people who is absolutely fiercely loyal … and that’s kind of encouraged me to be as loyal in return.

I know she fears that I’ll die. Sometimes I’ll come back late from a walk to the shops and she’ll say she was scared something had happened to me.

I’d be lost without her. I’d hate the thought of her going first. I think we’ve become kind of … I think the relationship’s slightly obsessive. We rely on each other a great deal. It’s wonderful, but there’s always a fear it will finish. I don’t think either of us could envisage a future without each other and that’s why my biggest fear is losing her. And I think hers is losing me. I think.