‘I also think it’s quite true – certainly for Joan Ferguson; that relationship she has with Vera Bennett is probably the closest she has ever had in her live. When it doesn’t go the way Joan would like, she feels betrayed and people have to pay.’ Equally fascinating is the love for the character of Joan herself – and the way we, as an audience can’t help but be drawn to her despite her murderous, torturing and abusive ways. Pam mused: ‘It’s pretty perverse that people get drawn into such a complex character – she’s a piece of work is our Joan Ferguson. But we’re all drawn to the mystery of people who behave badly – she is up to no good. People who behave in a way that you wouldn’t be allowed to in real life is fascinating; especially for me as a performer to be able to embrace it and try to understand all of those things. I enjoy the privilege and freedom you have to indulge in those nasty scenes. ‘I just feel incredibly lucky that they let me indulge in the full kind of breadth of that very complicated, troubled soul. It’s never just one note of menace or weakness. There’s such structure to the writing – I have so much admiration for the writing team over how they do it.’ 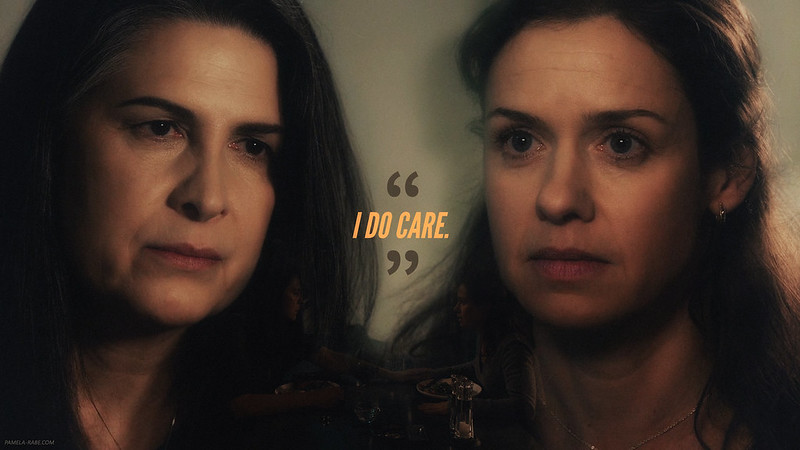 The show is certainly going to be more unmissable than ever with Joan back in the mix but Pam admits that it wasn’t always the plan for Joan to have survived the burial – she truly thought her character was dead and buried for good. She explained: ‘I always asked our wonderful writers that when they felt it was time for Ferguson to go, that they let me know and that she goes out with a bang. And I felt you couldn’t get much more of a bang that going out in a big box so I was sad but also pretty excited with the way they said farewell to the character – and I really did think it was a farewell so I was pretty surprised when the call came to tell me she is alive. ‘It was all tied up with them thinking the series was going to end at the end of season seven but when they got the green light to finish up with another 20 episodes, I got the phone call. I was called in to film that little season ending for 7. My fellow cast members didn’t even know about it – it was all top secret and my name wasn’t even on the call sheet. Everyone around me in the scene was played by someone from the team like writers or crew.’

And while we can’t yet reveal exactly what Joan has in store for those she wants to make pay, she teased that there will be some unexpected twists that will surprise fans. She added: ‘Everyone will know that there’s a few people who should watch their backs. The way that plays out is not what people will expect – or the characters. There are such interesting twists and turns. ‘They put cat nip in these episodes – just one more episode before I go to bed! But there’s so much to come up, it’s tricky not to give spoilers because there are so many big things to happen.’ Wentworth continues on Wednesday August 12 at 10pm on 5Star.

Wentworth continues on Wednesday August 12 at 10pm on 5Star.