‘We’re all like that here. As every season builds to a finale, there’s always someone going through high octane laundry press moments – Danielle (Cormack), Nicole (da Silva), Tammie (MacIntosh) – we all go through it. It was my turn for it to come round!

‘Kevin Carlin, who directed to direct the very first episode – he’s kind of our main guy. He discussed it with me when I was cast – talking about what was so powerful is that the prison itself is a performative environment where everyone is changed by incarceration and the stakes are life and death.

‘We have extraordinary characters who have gone on incredible journey. Everyone is put through the wringer – and some survive and some inevitably don’t.’

For a long time, it seemed that The Freak had fallen into the latter category before she ‘returned from the dead’. But Pam admitted to us that there was one clincher of a condition that sealed the deal for her returning.

She explained: ‘When they asked if I wanted to come out of the box – that was one of my very first questions. I said: “Will I have something to do with Kate Atkinson and Vera?” Both Kate and I enjoy working together and the ying and yang interactions and also the evolution of the relationship. ‘They obviously have an enormous pull towards each other, it’s a co-dependance that can be antagonistic and intimate. We enjoy playing with that. When they assured me that we have a lot to do with each other over all of these 20 episodes, then that was fabulous!’

Speaking more in depth about putting a series like Wentworth together, Metro.co.uk readers were interested to know how much input stars have in their scenes and whether Pam ever adds her own little twists to story or performance that are outside of the script.

She mused: ‘It’s hard to say – we have extraordinary and meticulously caring writers so it’s not in our hands to twist things in a different direction. But the job of being an actor is you are interpreting the script through the character you understand and have built. There will be times when I might have a conversation about “what ifs” and if they like the idea, it might incorporate. It’s a collaborative process.

‘There are things that happen in the moment but that’s what acting is – we hope we get to a situation that, while you and your performers are playing with the material, there is a sense of freedom of play. You have a responsibility not to change the meaning of the scene though – if you do, they will say “thank you very much, let’s do another take!” We’re all professionals and know the story we are trying to tell – no-one randomly tries to divert.

But as season eight draws to a close and we face an agonising wait for the very final ten episodes, what has Pam’s standout scenes been since her return.

Passionately and sincerely, she responded: ‘It’s a bit tricky but I have to say – the little girl Lucy Dening, who played that vision that Joan sees, the tribute to The Shining! This eight-year-old girl mesmerised me with her work and she had such a presence. Some of my favourite scenes with her were my favourite.

‘All of us performers are players and the notion in there is play – we’re all kind of seeking in all of the intellectual and rigorous work, we want to forget that and go back to something childlike, free and playful. To watch this little human do that so effortlessly, I found it so moving, fascinating and she taught me a lot.’

We did suggest to Pam, who enthusiastically agreed, by the way, that Lucy could one day star in a Ratched-esque prequel of Joan’s story. So Netflix, if you’re interested, you know where you can reach me. 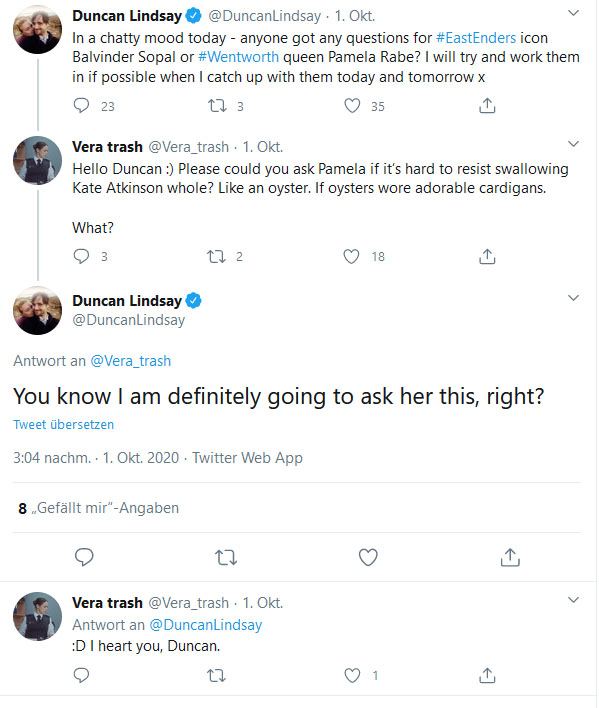 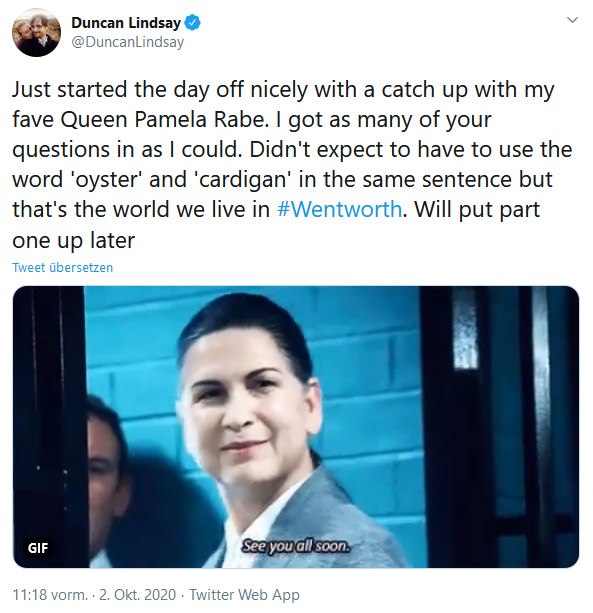 Wentworth Prison spoilers: Pamela Rabe teases last ever series for Joan and emotion of it ending

It’s a rare feat in Australia for a long running series by series drama to have the success and longevity that has been enjoyed by Wentworth Prison and its fans – and many would argue that there’s life in the cells yet.

But sadly, season nine will be its last for the forseeable and actress Pamela Rabe spoke with genuine emotion when speaking to Metro.co.uk about the moment the reality hit home that the beloved series was over.

She said, clearly feeling her own words: ‘All I can tell you is that I felt incredibly sad, we all did. Particularly in the way we had to film the final season under COVID restrictions. All we wanted to do was hug everybody and we couldn’t.

We just couldn’t. ‘And to watch the set be dismantled, it suddenly came home that it was really happening. We have been custodians of that story and trusted by Fremantle and Foxtel and handed a legacy by Prisoner Cell Block H – it feels like a glorious gift. Very rarely does such quality TV in Australia last so long and maintain a level of quality. It wasn’t easy but we’re so proud of it.

‘Our custody of it has come to an end but it someone was to pick up your wonderful idea (we had suggested a Joan Ferguson prequel) – that would be another iteration! That’s the wonderful thing about Wentworth – each generation can reinvent and rexplore than environment. There are still fascinating stories to be told.’

And that stands true for the final ten episodes which promise to be a rollercoaster for Joan. We tapped Pam for a few hints and she laughed coyly at our blatant attempts to get the juice.

She chuckled: ‘This is such a hard question, you know that! I am pleased you sensed the ambivalence there in Joan’s last scene where memories came back of who she is – it was a complex reaction to regaining her memory. That’s the dilemma has to deal with in the final season.

‘How can she reconcile and live with all those aspects of her personality? It’s not only a dilemma for Joan/Kath herself but the repercussions for everyone else in the prison. Particularly those who has history. Who will know and who won’t? And what will that mean for them? Hmmm.’

One thought to “Metro Interview: Wentworth Prison star Pamela Rabe only returned if Joan and Vera would have scenes”