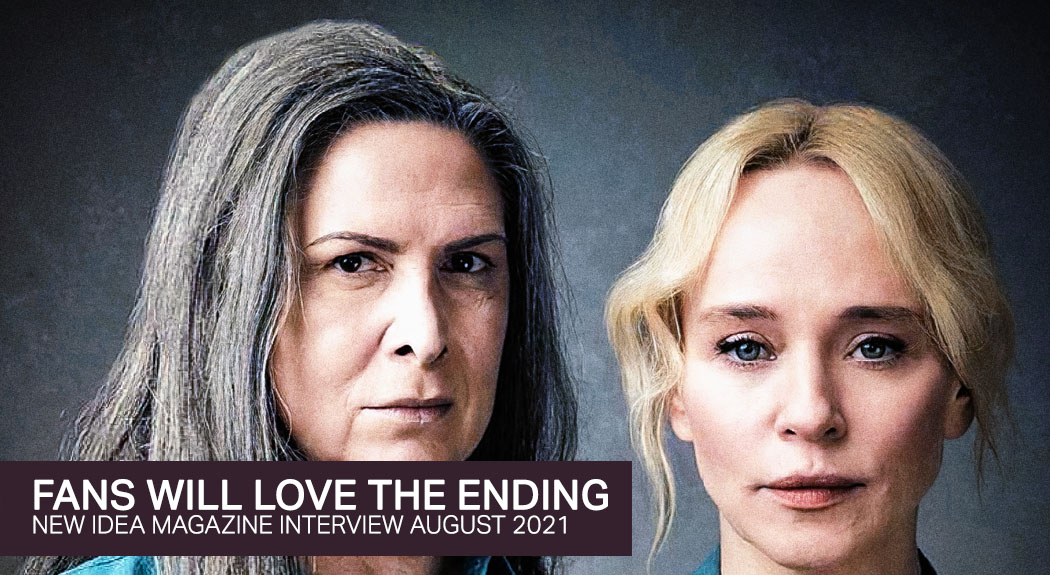 WENTWORTH PAMELA & SUSIE: ‘FANS WILL LOVE THE ENDING’
AFTER EIGHT NAIL-BITING SEASONS, IT ALL COMES DOWN TO THIS…

Last September, Wentworth fans were sentenced to almost a year-long wait to find out how the hit prison drama’s final season would play out. Now, they’re getting answers, as the remaining 10 episodes have arrived at long last! Telling New Idea it’s been a “bittersweet goodbye”, Top Dogs Susie Porter (Marie Winter) and Pamela Rabe (Joan ‘The Freak’ Ferguson) dish all about the final sentence…

What can fans expect from this season?

SUSIE: The usual rollercoaster of emotions and storylines that Wentworth has given them over eight seasons. All I can say is, strap yourself in for an amazing ride full of excitement, laughter, tears and joy. The fans won’t be disappointed.

PAMELA: I think tears, thrills, few smiles and laughs. All the stops are being pulled. I would hope they feel it’s a fitting wrap-up of each character’s journey.

How hard was it to say goodbye to everyone?

SUSIE: Really hard! We have shared so many ups and downs together, on and off the screen. You become a family, really. My last day on set, I burst into tears.

PAMELA: Well, I had a couple of chances to say goodbye, because I thought my character was gone in a box, so I already had my goodbyes. But it was a pleasure to get another one – it was very hard.

Do you think fans will be happy with the ending?

SUSIE: That’s a tough question because you can’t please everyone, but I do think the ending is perfect for the show. They have really packed a lot into it. It has a bit for everyone.

PAMELA: I suppose fans aren’t going to be happy it’s ending at all, but I would like to think they will feel a sense of satisfaction or a fitting cathartic release in a sense of closure.

Pamela, what was it like stepping into the shoes of an iconic character like The Freak? Did you feel pressure to live up to Maggie Kirkpatrick’s portrayal in Prisoner?

I mean, I always feel pressure when I embark on any role, because I want to be the best I can be. I wanted her blessing – she is an old friend and colleague, and it was important to me Maggie was happy to see me put on the black gloves. She was incredibly generous from the get-go and supportive of me in the role.

What’s the most surprising thing about filming a prison drama?

SUSIE: I think probably how much laughter and joy there is. Also doing the stunts was one of the best things as well. The physical stuff was so much fun. It stretched all of us I think.

PAMELA: Yes, I agree with Susie, I think that’s always the case. The more gruesome a story is, the more hilarious it is behind the scenes.