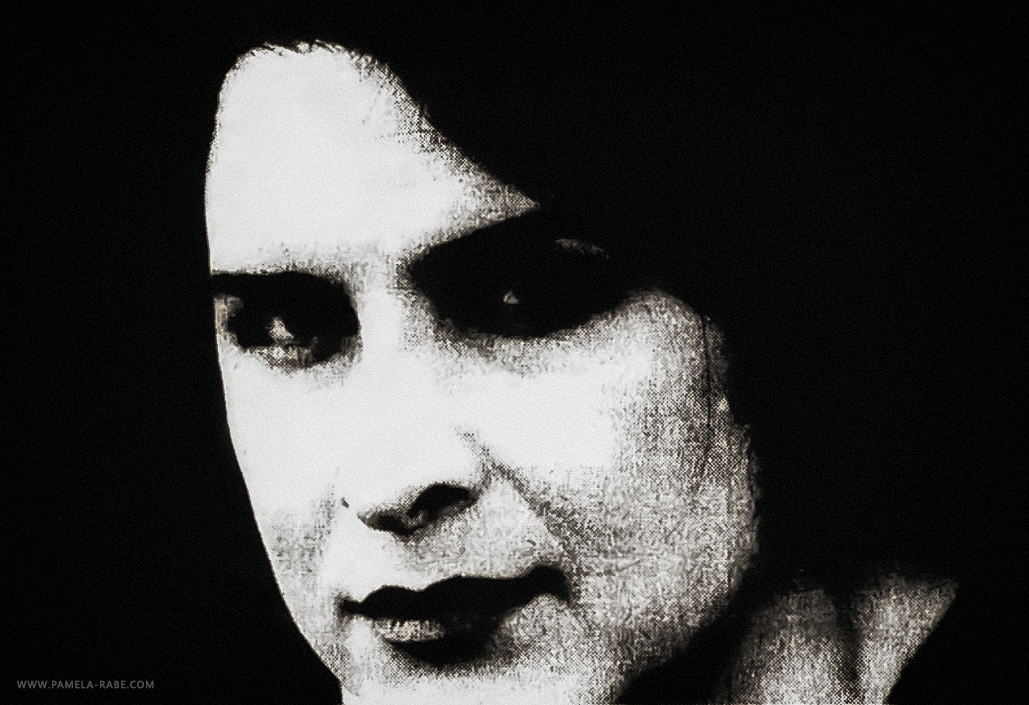 There are so many pressures to be smaller, bend down, try to blend in with the crowd, be feminine (whatever that means) — to actually keep your head up through that is hard. END_OF_DOCUMENT_TOKEN_TO_BE_REPLACED

Pamela Rabe used to be self-conscious about her Canadian accent. But she took Australian citizenship because she wanted commitment.

Pamela Rabe probably won’t thank me for this, but she is probably about to become a household name. She is in two movies and two television series, all in the same year.

She won’t thank me because Pamela Rabe is not one of those knocking on the celebrity door. She is thrilled that her work as an actor might be recognised, but any “fame” that might come with it is an uncomfortable notion.

She’s not when you meet her. She is soft and smooth and tall and very striking. She is also reticent, which is why I trod the careful path first, through early days.

“There was a certain effort to keep us occupied,” she said. I had asked her about her childhood in Canada, where she was the seventh of eight children. “We were sent off to things like music.“

With so many children, they were able to form an orchestra of sorts. There was a trombone, a French horn, a saxophone, a flute, classical guitar, even bagpipes.

Pamela was on the French horn and must have been good, because she went on to play in a junior symphony orchestra in Vancouver. “That experience of being a group and creating something had a big impact.“

What Pamela means is that her family was not particularly artistic, and so it might have been the music that put her in the right direction. All her brothers and sisters ended up as scientists or paramedics. 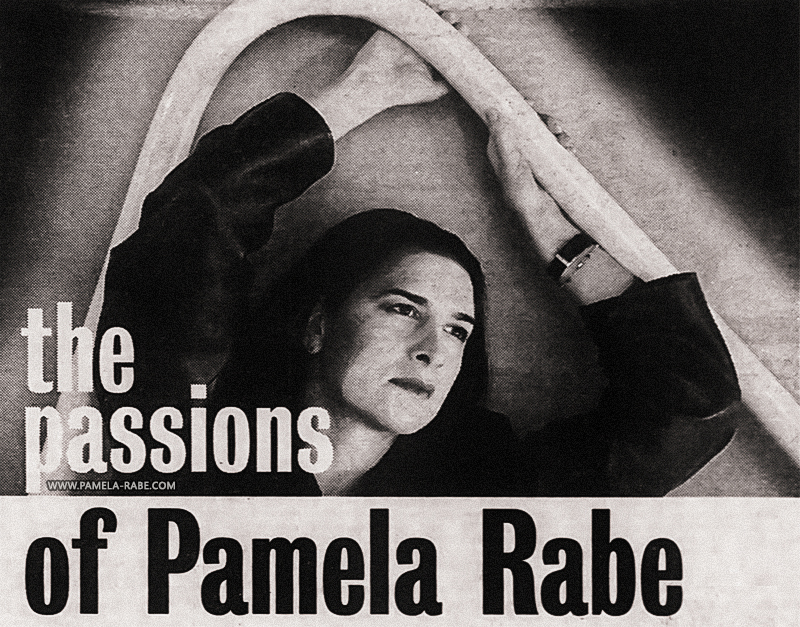 Rabe admits she finds the play a technical challenge, a theatrical relay event in which the almost musical exchange of verbal batons leaves no room for prima donnas. END_OF_DOCUMENT_TOKEN_TO_BE_REPLACED

Actor Pamela Rabe left Canada for love. She now lives and works in both Sydney and Melbourne, yet feels she hasn’t fully moved into all our theatre spaces, writes BOB EVANS.

AS a bald statement, Virginia Woolf’s assertion that for a woman to write fiction she must have “money and a room of one’s own” can sound so blue-stocking bourgeois and so positively Bloomsbury that the first impulse is to write it off as yet another bit of British elitism.
But that impulse evaporates if you read A Room Of One’s Own or see the dramatisation of Woolf’s two lectures to the women students at Cambridge on which she based her book. The play, with Pamela Rabe acting the role of Virginia Woolf, opens this Thursday at the Belvoir Street Theatre. Rabe has appeared twice before on stage at the Belvoir. The first time her identity was concealed under a mask of Japanese inscrutability as she played the Mama San in Daniel Keene’s adaptation of Cho Cho San for Playbox. She was still a virtual unknown in Sydney when she next appeared, playing Alice B. Toklas, companion to Miriam Margolyes in the role of Gertrude Stein. END_OF_DOCUMENT_TOKEN_TO_BE_REPLACED

Pamela Rabe has been busy. Her latest roles include Norman Lindsay’s wife, a mental defective and Virginia Woolf. MICHAEL SHMITH meets an actor to be reckoned with.

Like a lot of performers, Pamela Rabe saves her extrovert side for the stage. I am not sure who the real Rabe is, but the person curled up in the opposite chair looks as if she would rather be at the dentist than an interview. “This is terrifying,” she says, eyeing my tape-recorder as if it might bite. “Anyway, it won’t pick up much, as I tend to Mumble.” ‘Mumbles — just discernible — there are, along with lengthy, Pinteresque pauses interspersed with bursts of great eloquence and a couple of surprisingly raucous gusts of laughter. There is an edge of insecurity, too; but one tempered with a quiet confidence and laconic sense of humor. Every now and then, she stops to appraise what she has said, as if she is rewinding and replaying an internal tape-recorder, and corrects it. END_OF_DOCUMENT_TOKEN_TO_BE_REPLACED

After Pamela graduated, they lived together in Vancouver, and when Roger was appointed dean of drama at the Victorian College of the Arts, Pamela moved here with him. But in Australia, their careers collided head-on when Roger became first associate director of the Melbourne Theatre Company, then director. Since the MTC is the city’s major theatre company, the delicacy of Pamela’s position was obvious. “It’s a tricky area, it’s true,” Roger says. “After we came to Australia, for the longest time, we would never give an interview together (this was their first major joint interview). I don’t think it appeared in print that we were married until a couple of years ago. We just wanted to keep the thing as separate as we could.” END_OF_DOCUMENT_TOKEN_TO_BE_REPLACED

About 18 months ago, Roger Hodgman and his wife, Pamela Rabe, attended a friend’s wedding in Sydney. People were strangely polite to the pair. They looked deep into their eyes and asked: “Are you guys all right? Are you doing OK?”

A week later, a friend rang Hodgman, the director of the Melbourne Theatre Company, and Rabe, an actress, to say: “You know the story is everywhere that you have split up.”

The rumor swept through Melbourne’s notoriously gossipy arts circles and was followed by updates on the supposed new love interests of Hodgman and Rabe. “It annoyed me intensely,” says Hodgman, who has been married for eight years. “But you just feel so helpless.”

About nine months after the wedding incident, he was rung by a friend in New York who said: “Why didn’t you tell me? I would have thought I deserved to know.” Today, he is still hearing from acquaintances and strangers about his “break-up”.

At one point, Hodgman tried to trace the rumor. He rang a chain of friends but never discovered the source. He thinks it might have been inspired by Rabe’s 18-month stint living and working in Sydney a few years ago. (The couple spent “a fortune” on interstate flights during this time).

“Like most people in theatre circles, I rather enjoy gossip. I have always been entertained by it,” says Hodgman. “But this experience has really made me think twice when people tell me a story about someone else.

“It’s changed my attitude entirely about that sort of gossip. I am much less likely to believe it, or pass it on. There’s a line over which gossip passes that makes it really dangerous and destructive. If it’s true, it’s one thing, but I just think people’s private lives are private.”

Ironically, Hodgman says the latest gossip is that he and Rabe have got back together.

Pamela Rabe came to Australia from Canada in 1983, almost fresh out of acting school. “I remember at the time not knowing what I would be cast in and thinking ‘At least, maybe, I’ll be all right for a Neil Simon play’. And the funny thing is I’ve done everything but!”

Until now, that is. Rabe is to star in Neil Simon’s Lost in Yonkers, with Ruth Cracknell and Robert Grubb. The play won Simon the 1991 Pulitzer Prize and Tony Award for Best Play, and ripping reviews like “Neil Simon’s laughter and tears have come together in a new emotional truth” and “The last of the red-hot playwrights just got hotter”. END_OF_DOCUMENT_TOKEN_TO_BE_REPLACED