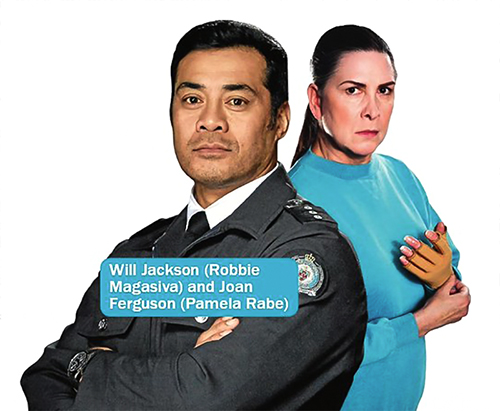 When we last saw prison guard Will Jackson (Robbie Magasiva) he was busy with a shovel, burying alive Joan ‘The Freak’ Ferguson in a makeshift coffin. So will The Freak (Pamela Rabe) really die a slow, agonising death being trapped underground?
Magasiva refuses to spoil it for viewers by revealing what happens but he happily admits he loved being part of the gripping storyline. “To be given the material to work with as an actor was a dream,” Magasiva says. “When I was speaking to the writers they had a few options about who would knock off The Freak. “But I think Marcia (Gardner), the head writer, said, reckon Will because no one would suspect that’. “So in terms of a cliffhanger it’s brilliant isn’t it — to leave it all set up for season six? All I will say is, it was great.” The Freak ended up being buried after taking the place of Allie Novak in an escape plot (organised by Frankie Doyle) from Wentworth Detention Centre. But prison guards Jake Stewart (Bernard Curry) and Will found out about the bid for freedom and decided to use the situation to their own ends — to rid themselves of The Freak, who is their mutual enemy.
Magasiva admits that Will hit a personal breaking point with The Freak, so the prison guard will have a lot to cope with this season. “What he did (burying The Freak) was out of character for him so it’s basically living with that guilt,” says Magasiva, of Will’s role this season. “The writers have raised the bar again. In terms of every season, they do raise the bar and season six is living up to that as well.”
Raising that bar with the Wentworth storylines has been essential after the surprise death of key character and top dog Bea Smith (Danielle Cormack) at the end of season four. Magasiva admits he was concerned about how the series would fare without Cormack — an anxiety shared by many other cast members.
“We all were worried bemuse she (Danielle) was an essential part of Wentworth,” Magasiva says. “She was, I’d probably say, the main character. And her journey was the focus. Her character drove the whole season and all the seasons before … “So, yeah, we were a bit worried. But credit to the writers for pulling it out of the bag. I mean there were fans out there hoping she would come back. “But I think from a writers’ point of view the character could only go so far. I mean, I miss her — and Aaron (Jeffery/ Matt Fletcher) because there’s a little bit of a bromance happening there — but in order for the show to survive it needed to happen. There’s nowhere else to go after you’ve killed the killer of your daughter”
Despite the departure of Cormack, the last season of Wentworth rated well and other characters —including Frankie Doyle (Nicole Da Silva), Sonia Stevens (Sigrid Thornton), Allie Novak (Kate Jenkinson) and Vera Bennett (Kate Atkinson) — have become a key focus of storylines. However, Magasiva says Danielle Cormack still has many admirers. “We still get messages on social media saying, ‘When is Bea back?’ And I just say, ‘Dude … seriously?’ You know unless I have a dream and we all turn into zombies that’s when Bea will come back.”
Magasiva, 46, still keeps in regular contact with Cormack. Wentworth is filmed in Melbourne but when the Kiwi duo meet up in New Zealand, they try to go motorbike riding together whenever possible. “Dan is in Sydney so occasionally we do bump into each other. When she comes over (to New Zealand) for Christmas we try to organise to catch up and go for a ride. “She’s currently working back in New Zealand so I will flick her a text when there is a nice day back home and we’ll go for a ride. “She’s Harley ambassador for Australia and Harley ambassador for North Auckland Harley — we get bikes to play with. I’m hoping it doesn’t rain, so we can go for a ride.”

Source: The TV Guide | Thanks to Teresa for posting the full article!