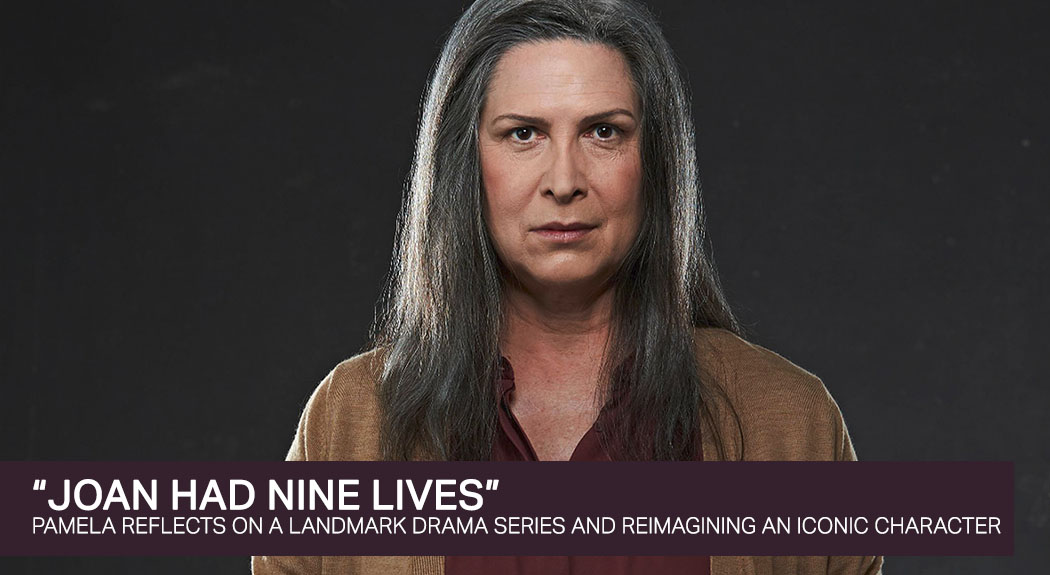 Pamela Rabe reflects on a landmark drama series and reimagining an iconic character.

“Joan had nine lives and I had no say in any of them,” says Pamela Rabe.

Since arriving in Season 2 of Wentworth in the enigmatic role of Governor Joan Ferguson, Rabe has delivered some of the show’s most compelling, terrifying, deliciously dark scenes.

She’s kept fans on the edge of their seats, cheering and hissing the villain sometimes at the same time.

Describing the character as her most “impactful” screen role to date, Rabe was well known for her theatre CV. But Wentworth has changed all that.

“I felt so blessed to be gifted a character like that. She was such a chameleon, because they were constantly challenging me to keep transforming but to keep it all anchored in one character that the audience could follow.

“There were a lot of curveballs thrown my way!

“I was the Governor that was brought in as the fixer at the beginning of the second season to help sort things out in what was already a dysfunctional prison environment,” she tells TV Tonight.

Across 6 seasons Joan has switched from Governor to inmate, to a resurrected amnesiac and various shades in between. Rabe has had the time of her life playing them all.

“It was Joan pretending to be Kath, then it was Joan who thought she was Kath. Then it was Joan, who realised that she was Joan, but had to maintain Kath… and then the Battle of Joan and Kath co-existing in the same person that takes us right to the final episode.”

“As soon as they took away the (hair) bun, the uniform and the authority of being the Governor of that prison and putting put Joan Ferguson into Teal, it was always a constant tension about who am I?” she reflects.

“Clearly Joan Ferguson is a very good actor, but it challenged me to try to live up to that and keeping up a persona that would occasionally give you glimmers of the Joan Ferguson that the audience knew, while still presenting a credible face that allowed me to survive within that environment. That tension kept going.”

As she played out the Joan / Kath storyline, Rabe had an idea of the destination if not necessarily the journey. Episodes were filmed in 2 episode blocks at a time, so cast would wait for scripts to see what writers had in store.

But being ‘raised from the dead’ at the end of Season 7 was one of the more more thrilling twists.

“When they asked me to come back out of the box, I had a meeting with (director) Kevin Carlin to ask, ‘How’s this going to work?’

“He had a general gist of what the tensions were going to be. But he didn’t really know how it was going to play out.

“I remember asking (exec producer) Jo Porter I think, or (script producer) Marcia Gardiner, ‘Do I live or do I not?’ I remember an enigmatic look on her face. They were still working out, in terms of serving this theme of redemption, what would be the most satisfying conclusion to that particular storyline.”

When she joined in 2014 in the role made famous by Maggie Kirkpatrick, she’d only seen small portions of Prisoner whilst living in her Canadian home country. Rabe later worked with Kirkpatrick in theatre.

“Maggie’s always been incredibly supportive and really complimentary. We’ve done a couple of fan events together overseas. She came down onto the Clayton set. I think we did a little spread in TV Week several years ago,” she recalls.

“It was so interesting that at that particular time, the jury was still a little bit out with the old Prisoner fans, as to whether this reimagining was going to be worthy of their attention.

“But you could almost hear the thunk around the world as the old Prisoner fans, for most part, came along for the ride, at the same time as a whole new generation were engaging in a really invested way with this new series.”

The final 100th episode now reaches screens, filmed a year ago in the middle of Melbourne lockdowns. Will Joan suffer a final indignity or will she triumph? Rabe isn’t saying.

“I don’t think I knew how I was going to end until pretty close to the final episode. I certainly didn’t know the details of it until probably halfway through shooting the episodes we’ve watched go to air over this last two weeks.

“The conditions under which those final episodes were shot, meant that there was a lot of COVID safety protocols in place. There were a lot of people completing their final scenes and being rushed to the airport, to get on flights before borders slammed shut again. There were no great hugs to say goodbye. We weren’t allowed to have that physical contact. There was no wrap party where you could all get together and say, ‘Look, what we look what we made!’”

Now having crafted such a memorable character does she fear being type-cast in future roles?

“No, I don’t think about it very much. Maybe I should. The one luxury or a privilege that I’ve had, is that I’ve done a lot of things during my career, and they’ve run the gamut of genre and the types of roles that I’ve been lucky enough to play,” she insists.

“I haven’t done a huge amount of television, and this is the most impactful kind of television or screen project with the longest life, that I’ve ever been involved in.

“So I understand that some people might associate my mug with that character.

“I just hope the fans have enjoyed the ride and that they squeal at their television sets the same way as I have been doing as I’ve watched it with everybody. We’ve all been part of a very special series created for Australian television and for the world.”

A Woman of Substance